Alumni giving is crashing and the culture of sameness in advancement is partially to blame.

Why? Because colleges and universities simply don’t know their alumni very well, and in the networked age – where the battle for attention is primary to everything else – higher education is woefully behind in being able to demonstrate post-graduation value to alumni (more on this in last week’s post).

So how can fundraisers secure the attention of graduates and thereby increase engagement and alumni giving? The answer lies in first understanding those factors and characteristics that contribute to their identity as alumni – a construct known as “Alumni Role Identity.”

Perhaps this is not surprising, but the factors and characteristics that make up alumni identity will shock you – namely by what doesn’t figure into the mix.

Evidence-based study of alumni identity has busted 3 massive myths long held in higher education fundraising, and here they are, in no particular order. 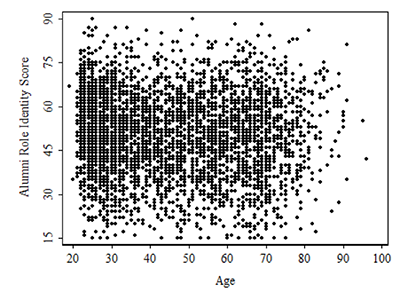 Data from 4,094 study participants revealed no correlation between alumni identity and age.

Recent graduate engagement strategies are common place in advancement. These efforts are based upon the idea that connecting with former students immediately after graduation will lead to greater levels of lifelong engagement and giving (there is little empirical evidence – see Monks, 2003). Research into alumni identity suggests that recent graduates are no more worth our strategic attention than any other age group when implementing institutional initiatives to increase alumni engagement and giving.

Myth #2: Alumni feelings of connection are associated with class year

Alumni identity is not influenced by the number of years that have passed since graduation.

The level of connection to alma mater reported by study participants was not a function of graduation year. This calls into question the true value of class reunions as a strategy to drive engagement and giving. It may be true that alumni find joy in meeting together on campus many years after graduation, but the organization and facilitation of reunions does not seem to translate into a deepening of attendee alumni identity.

Myth #3: Alumni feelings of connection are bolstered by proximity to campus 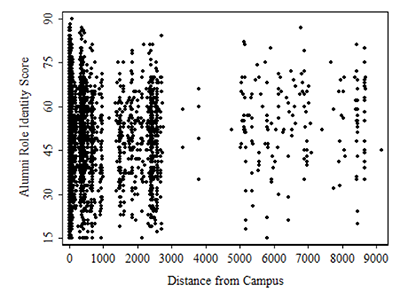 Whether or not a graduate lives near the campus has no bearing on their alumni identity.

Study participants who lived from 1 to 9,000 miles from their alma mater reported high and low levels of connection evenly. This suggests that geographically-based alumni engagement strategies such as events and chapter meetings are missing the mark.The time and resources that colleges and universities put into corralling graduates through regional activities produce no observable effect on alumni identity.

Busting these myths is important because so many of the stalwart alumni engagement and annual and major giving strategies in higher education are based on alumni age, years from degree, and proximity to campus.

When faced with limited resources, most advancement shops default to funding initiatives that target alumni who are older, recently graduated, or live near the school. This is a culture of sameness.

The science of alumni connection invites us in a new a direction – to focus our engagement and fundraising strategies on graduates with measurably high levels of alumni identity.

Now is the time for higher education fundraising to discard its culture of sameness and move forward accordingly.

So in what areas should we, as advancement professionals, focus our energies in order to increase the alumni identity of graduates?

How can we broadly measure alumni identity among former students and translate that into a dynamic engagement score?

More on that in the third and final post in this three-part series on the science of alumni connection. And don’t forget to mark your calendars for our upcoming webinar.

Join Dr. Jay Le Roux Dillon and the Salesforce.org Higher Education team for our upcoming webinar, “Alumni Engagement Scoring: What Does the Science Tell Us?” on Tuesday, January 30 at 2:00 pm EDT/ 11:00 am PDT where we’ll explore:

Want to meet your colleagues in person? Sign up for the Higher Ed Summit in Washington, D.C. from March 21-23.