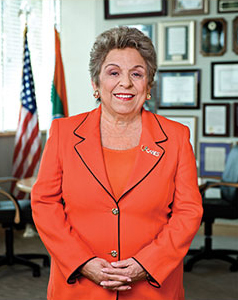 Donna E. Shalala became Professor of Political Science and President of the University of Miami on June 1, 2001. President Shalala has more than 30 years of experience as an accomplished scholar, teacher, and administrator.

She serves as a distinguished senior fellow in the Economic Studies Program and the Engelberg Center for Health Care Reform at the Brookings Institution.

During her tenure, UM has solidified its position among top U.S. research universities. Momentum: The Campaign for the University of Miami, one of the first billion-dollar capital campaigns completed in the United States, raised $1.4 billion in private support for the university’s endowment, academic and research programs and facilities.

In 1993 President Clinton appointed her U.S. Secretary of Health and Human Services (HHS) where she served for eight years, becoming the longest serving HHS Secretary in U.S. history. At the beginning of her tenure, HHS had a budget of nearly $600 billion, which included a wide variety of programs including Social Security, Medicare, Medicaid, Child Care and Head Start, Welfare, the Public Health Service, the National Institutes of Health (NIH), the Centers for Disease Control and Prevention (CDC), and the Food and Drug Administration (FDA). At the end of her tenure as HHS Secretary, The Washington Post described her as “one of the most successful government managers of modern times.”

She served in the Carter administration from 1977-80 as Assistant Secretary for Policy Development and Research at the U.S. Department of Housing and Urban Development.

In 2007, President George W. Bush handpicked Shalala to co-chair with Senator Bob Dole the Commission on Care for Returning Wounded Warriors, to evaluate how wounded service members transition from active duty to civilian society. In 2009 she was appointed chair of the Committee on the Future of Nursing at the Institute of Medicine of the National Academy of Sciences.

President Shalala has more than four dozen honorary degrees and a host of other honors, including the 1992 National Public Service Award, the 1994 Glamour magazine Woman of the Year Award; in 1992, Business Week named her one of the top five managers in higher education; in 2005, she was named one of “America’s Best Leaders” by U.S. News & World Report; in 2008, President Bush presented her with the Presidential Medal of Freedom, the nation’s highest civilian award; and in 2010 she received the Nelson Mandela Award for Health and Human Rights, which recognizes individuals for outstanding dedication to improving the health and life chances of disadvantaged populations in South Africa and internationally. In 2011, she was inducted into the National Women’s Hall of Fame in Seneca Falls, New York. In 2014, she was recognized by the Harry S. Truman Library with the Harry S. Truman Legacy of Leadership Award and received the Greater Miami Chamber of Commerce’s highest honor, the Sand in My Shoes Award, for her significant contributions to the community.