World Refugee Day: 5 ways that Salesforce got involved in 15 cities around the world.

Driven by war and fragile states, over 65 million people worldwide are forcibly displaced. The majority them come from Syria, where the brutal conflict of civil war, now 6 years running, continues to force people to flee. Refugee crises are not a new phenomenon, but Europe and the West have been slow to wake up to the urgency of the situation. But considering the 370,000 asylum seekers who arrived on European shores in 2016 alone, the crisis can no longer be ignored and countries are taking action to support those in need.

In an effort to create a cohesive global movement to tackle this issue, the UN High Commissioner for Refugees (UNHCR), has allocated June 20th as “World Refugee Day.” Since 2001, this day has provided an opportunity for government officials, nonprofit organizations, civil society, and the private sector, to come together to celebrate the strength and resilience of refugees worldwide, raise awareness about the crisis, and make a meaningful impact.

By educating their workforce on the issue, by providing employees with paid hours to volunteer and nonprofit organizations with best-in-class technology tools, Salesforce is doing its part in mitigating the effects of the global refugee crisis. Let’s take a trip around the world to 12 Salesforce offices to discover how Salesforce employees globally commemorated this important day and made an impact on this crisis. Here are 5 ways Salesforce got involved: 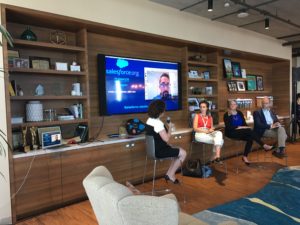 San Francisco, CA : At Salesforce HQ, over 150 employees came together in a two-part event. 80+ volunteers assembled 300 hygiene kits, in partnership with World Vision, to be shipped to Syrian refugee camps in Armenia. Following the kit-building, Salesforce.org hosted a captivating panel with 4 leading International Development organisations: Care, World Vision, UNICEF, and the American Red Cross. “This event changed my definition of what constitutes a ‘refugee’,” says one attendee, “and showed me that education is a critical issue.” 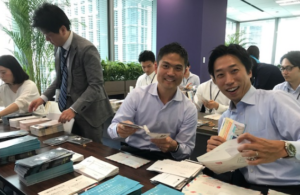 Tokyo, Japan : Over 60 employees stuffed envelopes with newsletter for Association for Aid and Relief, Japan which provides emergency assistance for refugees, victims, and people with disabilities. Following the volunteer activity, the Japan Association for Refugees hosted a lunchtime seminar at which over 20 employees took part in an interactive discussion on how to raise awareness about the plight of refugees in Japan and create a more integrated society. 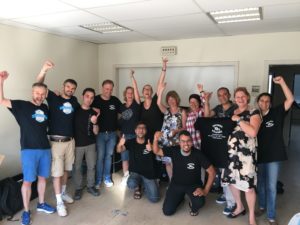 Brussels, BELGIUM : Following a lunch with BXL Refugees and some of the refugees that they support, 13 staff members installed new locks on doors, sorted clothes and installed a cyber cafe that will help refugees get internet access. “The day was filled with emotion and great moments,” says Salesforce’s Aliki Foinikopoulou. “The strongest moment for me was when we met a refugee whose asylum application had just been accepted. I will never forget the smile on that woman’s face!” 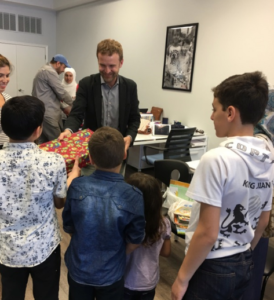 London, UK : The London office held a lunch-and-learn focused on issues faced by Refugees in the UK. This session included a quiz which revealed shocking facts about refugees’ realities. The team also collected over 4,000 diapers and thousands of sanitary napkins to be shipped by a charity to refugee camps in Greece and Jordan, where they are in desperately short supply.
Chicago, IL : In the windy city, the team commemorated an important Muslim holiday, Eid al-Fitr by organizing an Eid Gift Drive for Refugee Families in partnership with the Syrian Community Network, an organization dedicated to aid and assist in the resettlement of Syrian refugees in the Chicagoland area. Sixty children received gifts, a powerful way to say “welcome,” and to feel the comfort of knowing that their cultural traditions can survive even in a foreign land. 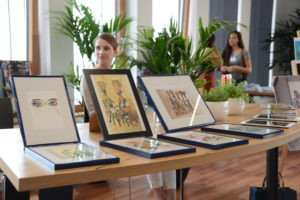 Munich, Germany : At the birthplace of Buddyforce, 15 refugees and 50 Salesforce employees came together to explore how diversity enriches society. The event featured a band of refugee musicians and farmers-market-style stands to provide meaningful interactions with refugees in their communities, and to highlight cultural elements of local refugee populations: bread-making, Arabic and Farsi lessons, artwork, story-telling, a photo display. The day ended with a lively game of football, as a reminder that no matter how different our cultures might seem, there are always common elements to be celebrated!

Amsterdam, Netherlands : The team hosted Adel Albaghdadi, a Syrian refugee who arrived to the Netherlands in 2015. His pride, resilience, and love for life were incredibly inspiring for the 20 participants who listened to his story of fleeing Syria, leaving everything behind. Illustrated by photos and a short video, his journey took listeners from beautiful Syria to countries in the Middle East, and finally to the Netherlands. To pay it forward, Adel started a nonprofit in NL, to spread awareness of the refugee crisis and how individuals can play a role in supporting incoming refugees with their skills.

Dusseldorf, Germany : Employees met with Syrian refugees from their community and shared stories about their personal experiences and about important elements of their cultures: language, food, music, customs. The group shared ideas about how best to accommodate newcomers to the country. The day wrapped up with a powerful performance from a local choir of refugees. 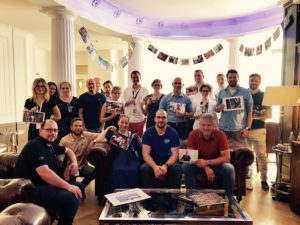 Berlin, Germany : On World Refugee Day, employees organized a photo exhibit depicting current and past refugee crises, and came together over tea and deserts to engage in a dynamic dialogue and about personal experiences, perceptions (and misperceptions), and opportunities to get involved. The following day, employees partnered with Give Something Back to Berlin (GSBTB) and attended a Fête de la Musique neighborhood party at Refugio ShareHaus. Some of Berlin’s Buddyforce buddies joined the festivities, exchanged stories, and discussed with a number of NGOs regarding their successes and challenges in tackling the refugee crisis. The event was by no means adult-only: employees’ children joined those of local refugees for face-painting and chalk-drawing, as a reminder that no matter where you’re from, kids are kids!

4. Held information sessions on the crisis and on how employees can get involved

Jena, Germany : Building off of the highly impactful Buddyforce program piloted in Munich, the Jena team commemorated World Refugee Day by launching the program locally. In partnership with the Berlin charity jobs4refugees, the team held an information session and recruited new mentors for the program.

Paris, France : Employees gathered over a casual lunch to learn about the work of Utopia 56, a local nonprofit that helped establish the first humanitarian refugee camp in France, and that continues to support refugee populations in Paris and elsewhere in France. Utopia 56 has mobilized thousands of volunteers in the Paris region, but the need persists. Employees learned about ways to spend their 7 days of paid volunteer time to support this organization’s work.

Milan, Italy : Salesforce staff listened to the presentation by Comunità di Sant’Egidio, a nonprofit supporting refugees through poverty alleviation and health aid in 70 countries around the world. The organization exposed the difficult circumstances in which too many people who have been displaced have to live. In response, staff donated 355 euros to the DREAM project to help refugee and displaced children fight HIV and AIDS. 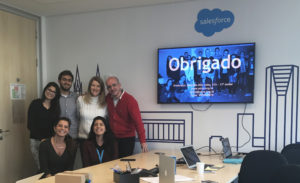 Sao Paulo, Brazil : Across the ocean, Salesforce hosted Marcelo Haydu, the Executive Director of Adus, a nonprofit whose mission is to reintegrate refugees in Brazil. Marcelo shared an overview of the history of refugees in Brazil, the main challenges associated with integration, the organization’s projects to support refugees, and the ways in which employees can get involved.

5. Volunteered at the heart of the crisis

Greece: Beyond office-based activities, Brielle Nikaido, a Marketing Director at Salesforce, traveled to Greece to participate in an Effect.org hackathon to support the refugee crisis. The group worked with three NGOs (Do Your Part, We Need Books, and Hope Cafe) to help them operate more efficiently and continue to support refugees at scale. “With large NGOs starting to pull resources and funding out of Greece,” Brielle shares, “it was incredible to see many individuals in Greece quitting their paid jobs and coming together to create grassroots organizations and projects to support the refugees and provide services to help them integrate into Greek society.”

France: Barbara Campos, a Senior Instructor at Salesforce, spent her volunteer-time-off days cooking food for Refugee Community Kitchen, which serves 1,200 meals a day to refugees in the Paris area and which works out of a warehouse shared by Help Refugees and other organizations. She then helped deliver 250 meals to refugees in the Calais camp near Paris. “The majority of our customers are young men from conflict-torn parts of the world,” she shares “mainly in Africa and the Middle East.” When she discovered that Help Refugees is a recipient of 10 donated Salesforce licenses through Salesforce.org’s Power of Us program, she also decided to help the organization implement the technology infrastructure needed to manage their large volunteer base.

From donating and volunteering to hosting informational sessions and opportunities to engage with local refugees, Salesforce collaborated with 22 nonprofit organizations working tirelessly to remediate the global refugee crisis. Hundreds of employees got involved across 10 countries to commemorate World Refugee Day, in hopes of making a meaningful impact in the lives of those less fortunate.