What’s the “Moonshot” for Your Nonprofit? 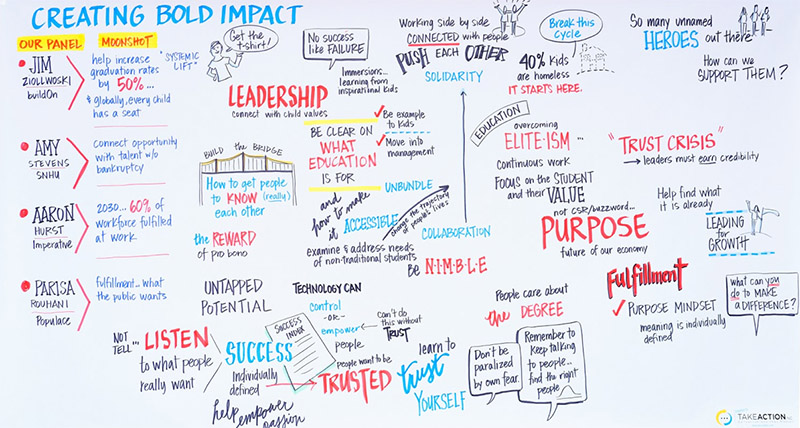 If you give your heart to a goal, it will repay you. It’s the law of the universe.
– Bear Grylls

When I fly, I like to imagine Ben Franklin on the plane next to me, his eyes wide with astonishment that airplanes are possible.

In 1962, only 59 years after the first successful airplane flight, John F. Kennedy proclaimed: humans would fly to the moon. Kennedy’s audacity cannot be understated: important rocket technology precipitated out of World War II, and similar accelerated technology advances (due to the war) were underway in computing, but to say “we shall fund this,” and hire people to work on it, and take the steps necessary to piece a moon landing together was a monumental act. 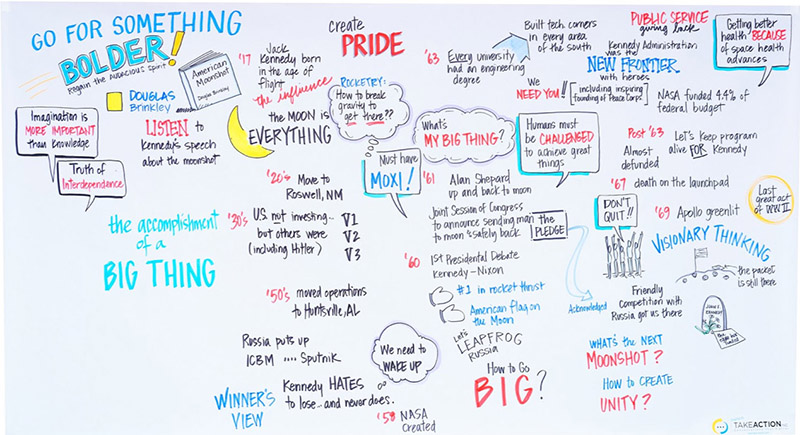 Many of us feel today that unprecedented challenges like the existential threat of climate change, the heartbreak of refugee disasters, or the rising threats to liberal democracy are overwhelming. In my own work on climate change, I heard many times that any solution seems impossible. I don’t know if this is true or not. I do think, however, that we can no longer make incremental progress on these issues. We need moonshot-style audacity in nonprofits. We need nonprofit programs that demand the best from us, and we need leadership that challenges and inspires us. 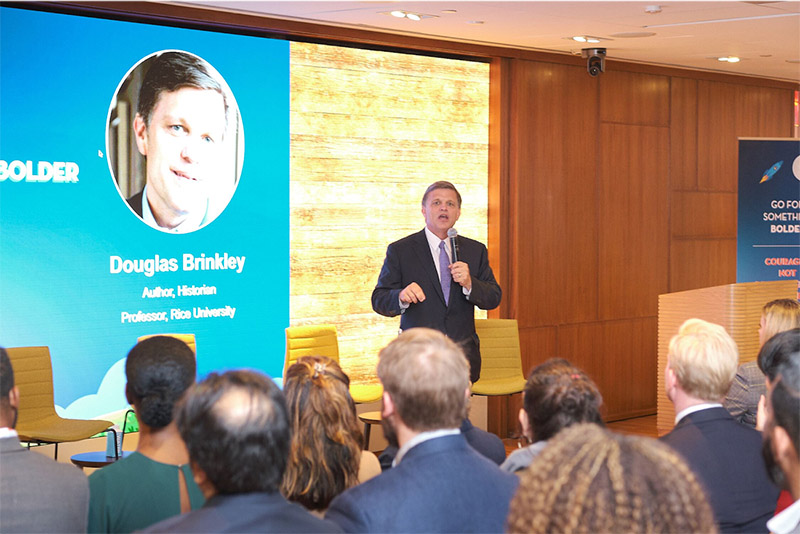 Douglas Brinkley speaks at the Salesforce.org Go For Something Bolder event in New York.

Nonprofit leaders recently came together in New York City to explore these ideas and challenges. We heard from CNN historian, author, and Rice University professor Douglas Brinkley talk about JFK’s moonshot. Douglas put the story in historical context. It was an era of much social upheaval and unprecedented progress, much like our own era. Incredibly innovative science and technology was born from the space program – things that improve lives today. 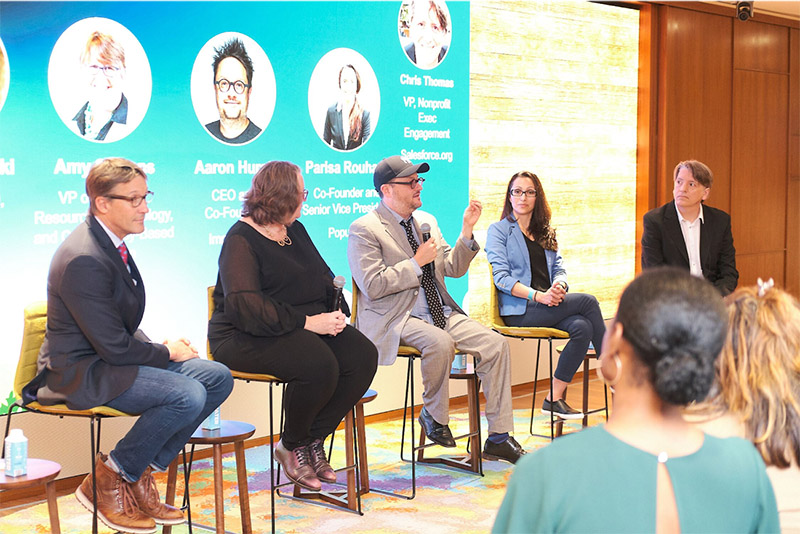 Nonprofits heard from a panel that included Aaron Hurst, Co-founder and CEO of Imperative, Founder of the Taproot Foundation, and author of the The Purpose Economy; Amy Stevens, Vice President, Academic Resources and Technology, Competency Based Education at the innovative Southern New Hampshire University; Parisa Rouhani, co-founder of Populace and Jim Ziollwoski, Founder, President & CEO of buildOn. These visionary leaders talked about their own moonshots, and how they challenged themselves and their organizations to take on big challenges. Raf Portnoy from ADL spoke about how his organization was using technology in innovative ways to identify and track hate speech both online and offline.

These thinkers discussed their own moonshots – both organizational and personal – and what they learned in the process of reaching for higher ground. Amy Stevens discussed disrupting higher education access with the help of partners. She found that: “Talent is equally distributed. Opportunity is not,” Regarding the use of technology, Parissa Rouhani said: “The question isn’t about the technology itself (whether it’s good or bad), it’s about how we use it. Is the technology being used to control people – to do things to and for them – or is it being used to empower them to do the things they want for themselves? It ultimately comes down to whether you trust people with the power to make decisions for themselves and act on their own behalf. And one of the things we learned from the success index is that people care deeply about being trusted.” Jim Ziollwoski talked about what he saw working on educational development in the developing world: “It’s not so important that buildOn constructs schools, we do. What is important is how we do it. We empower the communities to build the schools. And they keep building long after we are gone, creating systemic lift. To achieve this we’ve gone way beyond collaboration and into solidarity. Here in the U.S., our CEO stakeholders serve alongside buildOn students from Deep East Oakland to the South Bronx and they tell us they’re learning about leadership from buildOn students!” Aaron Hurst’s advice for those contemplating their own bold moves was: “Take waves that already exist and surf them.”

Our Go for Something Bolder night culminated with a call to purpose from James Jenkins at the JFK Library Foundation, who said that President Kennedy knew that Moonshots begin with people finding community in the “ask not” spirit, aligning values and vision, then acting together for small missions that build upon one another. He encouraged us to connect with cross-sector collaborators, to read President Kennedy’s historic speeches, and to visit the JFK Library in Boston. “For courage, not complacency, is our need today—leadership, not salesmanship. And the only valid test of leadership is the ability to lead and to lead vigorously,” James recited from Kennedy’s New Frontier Speech. The participants are already discussing ways to reconvene and connect more dots around shared goals in the future.

Nonprofit organizations occupy a special place in society and exist for many reasons, one of the best being to solve problems for humanity and create healthier lives for us all. Nonprofits steward constituents and empower groups through communities, networks, ideas and resources. Using modern technology, they can achieve new levels of scale and possibilities for personalized engagement that could dramatically augment the “power of the people.” 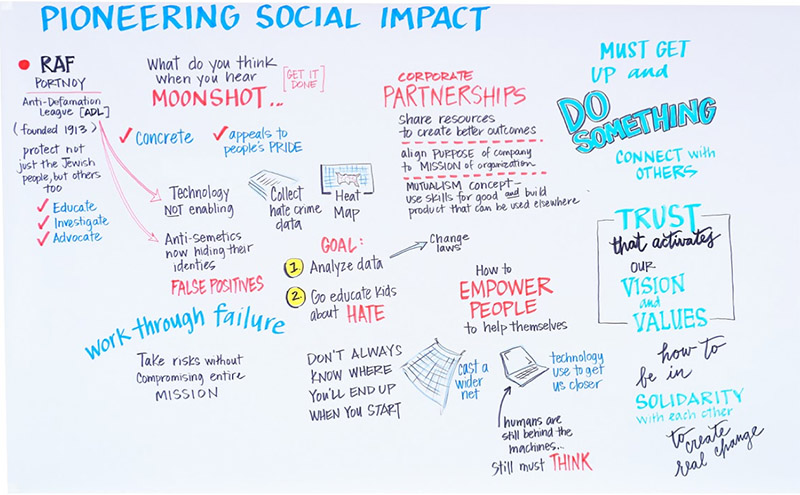 One reason that jet planes would have been impossible for Ben Franklin to imagine was because the fuel that could power them didn’t exist in his day – it would have been like imagining a warp drive. We have some ideas about where technology will take us when it comes to changing the world, and moonshot-style programs in nonprofits, with audacious goals and big ambitions, are what will get us there. The technology is the fuel that will power it. To be sure, we need to do the day-to-day, incremental work as well, but now is the time for leadership and vision for a new future.

What’s your nonprofit’s “Moonshot”? If you’re a big organization, it might be something like “Contribute to getting 100 U.S. cities with populations of more than 500,000 to commit to converting their energy grid to 100% renewables.” If you’re smaller, it might be more like “Implement a marketing/CRM system that will increase our monthly donors from 2% of our active list to 7% in five years.” Share your vision on Twitter with the hashtag #NGOMoonshot! 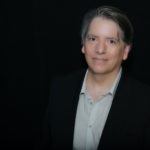 Chris Thomas is interested in how digital enables change in the world. Before joining Salesforce.org, he was Chief Innovation Officer at the Sierra Club, ran the Digital Products Program at Greenpeace International in Amsterdam, and has held leadership roles in both tech startups and Fortune 500 companies. Connect with him on LinkedIn or on Twitter: @cxthom