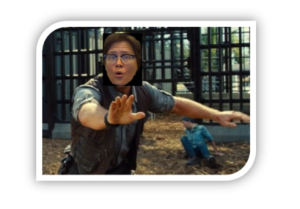 Hold on a sec! Before heading through the gates of Jurassic Reports you should know that many have attempted this journey and few have survived. (Okay, okay! Everyone has survived but I’m trying to be dramatic in order to hold your attention!)

But there is a way through Jurassic Reports. It is treacherous and filled with all sorts of danger…unless of course you know the secrets. (snicker)

If you begin this adventure, your goal will be to make it through Jurassic Reports ALIVE. If you do make it through then you earn the right to call yourself a Jurassic Reports Park Ranger. (Since this is my fictional park I can hire anyone I want, pay them whatever they want, make up titles and such, and generate made up crazy sounding report dinosaurs all day so it would be crazy for you not to take part in this totally make believe scenario. Right? Right.)

Download this document to understand the ins and outs of when Matrix Reports and Joined Reports can be put to best use. Also read through some quick reminders about general best practices when entering the always-thrilling Jurassic Reports Park!