Transgender Day of Visibility: ‘I want to be seen & accepted as I am’

I am a transgender man.

Partly I wish this wasn’t my first line of introduction, and partly I am glad that it is so. Most introductions don’t start off along these lines — “I am a man” or “I am a woman” — and even rarer are introductions that sound like “I am a cis man” or “I am a cis woman.” The reasons for this are obvious and direct our attention to the gender identity assumptions of our contemporary society. Uttering the word “trans” sounds like a whimper rather than a bang in the face of the threats that take brutal forms. It smells of fear, pain, alienation, and related elements that we all try overcoming in our day-to-day life.

Yet, it’s not like our society is unfamiliar with the word ‘trans’ in other contexts. The prefix trans-, meaning ‘across’, that’s used in words like transformation, transcendence, or transparent, is quite visible in our everyday vocabulary and produces some sense of journeying across. However, in the context of gender identity, it’s hardly ever a comfortable concept, much less something to be proud of.

For the longest time, I could not speak of trans within the context of my identity because of the terror in the terrains between invisibility and visibility. I grew up in a place where all kinds of expressions are suppressed, where marginalized communities are encouraged but denied any real authority, where pop cultural depictions of transgender people involve a glaring cisgender, heteronormative-ness.

In India, even queer movies involve the selective privileging of a few communities from across the LGBTQIA+ spectrum, with little to no representation of transgenderness. What is transgenderness? To me, it feels like a journey across the binary assumptions of our society, across the gender that’s assigned and experienced, across the patriarchal, heteronormative structure our society is built around.

The umbrella term we use in India to generalize trans experiences is ‘Hijra.’ In India, Hijras, including intersex and transgender people, heavily coat themselves in makeup, flaunt their glittering sarees, and swagger through crowded intersections knocking on every car door for a coin in exchange for blessings. They also flaunt their moves at temples. They crash birth ceremonies and fancy weddings, heartily singing bawdy songs.

How do I explain ‘trans’ to the people around me? Most importantly, why should I? Visibility demands explanatory power in such cases. In ancient India, Hijras were once venerated as Demigods. With colonization came a rigid, albeit false, sense of morality and judgment dismissing anything that went against ‘the order of nature.’ With colonization began the conquest of lands, and bodies became battlegrounds.

My privileges have supported me to get out of India and travel to the Netherlands for the purpose of research. It was in Amsterdam that I started actively engaging with trans communities, and the first time I came out with my pronouns was when I joined Mama Cash as an employee. I have been extremely lucky to be working in a safe, diverse, and inclusive feminist environment — which amounts to a great deal of importance for trans people like myself. I was seen and accepted as I wanted to be.

I also joined a house of drag kings where I found fellow trans men with similar experiences as mine. Soon, it became clear that I could not only be proud of my trans identity, but be proud of all aspects of my identity. From my perspective, I wish there was nothing to be explained about being transgender. I wish everyone could just see me as I want to be seen, and respect and accept me as I am.

I hope we reach a place of complete transgender visibility so that sometime in the future, trans people don’t have to bear the burden of other peoples’ need to make sense by categorizing people. I think it’s okay to allow some sense of ambiguity when it comes to identities — after all, every human on this planet is trying to figure out who they really are, and gender identity is one aspect of it.

Yet, whatever minor or major aspect gender identity plays in one’s life, from my personal experience, I am aware that my trans identity has always played a major role in every step of my life. Now when I say, “I am a trans man,” it is with a bang and not an apologetic whimper. I hope this visibility makes sounds that can echo through many generations, and someday perhaps in a better world. None of us have to be victims of the rigorous categorizations, superfluous constructs, and unrelenting need to understand. I hope bodies don’t take up the space of self-worth and unabashed truth, and that the world can be something we build collectively.

Learn more about the work that Mama Cash does to support the rights of girls, women, intersex people, and trans people. 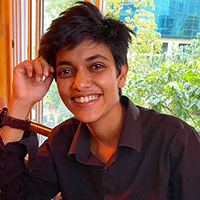 When not distracted by bouts of fanciful, philosophical misgivings, Hridija Mukherjee fights for the rights of marginalized communities working towards a more just world. He likes stationary and spending time with loved ones, but dislikes Einstein and desserts. Susceptible to daydreaming if left unsupervised.

At Salesforce.org, we often feature our partners and customers to highlight how we help nonprofits and schools create more impact.