The vast majority of Hackney’s current school population will not choose a career in STEM (Science, Technology, Engineering and Math). Working class and some minority ethnic groups remain under-represented in STEM based courses after the age of 16.

Salesforce.org was delighted to be able to support an organisation making substantial efforts to change this, through our grant programme.

Inspire! is a London based charity that aims to raise the achievements and aspirations of young people, develop their motivation and skills for the world of work and increase their ability to choose and achieve positive career, life and learning goals. Inspire! recently ran three pilot programmes for their new STEM project, iDiscover, in Hackney primary schools, carried out by a team of 70 volunteers.

iDiscover was a huge success, impacting 700 primary school pupils and 25 teachers, and changing Hackney’s perception of STEM! At the end of the project, 82% of pupils said they now know more about STEM careers, and that the sessions sparked wider discussion around gender stereotypes. In the words of a pupil “It’s nonsense to say that girls can’t build. I’ve seen girls building using blocks and lego.” The class discussions left students questioning who could have a career in STEM.

iDiscover had a striking impact on the students in Key Stage 1 in particular, the age at which research shows students first form gender stereotypes. Positive responses from one school to “are girls good at science?” increased from 52% to almost 100% after iDiscover.

“Who did it?” – Nursery pupils became detectives using fingerprints, metal detectors and x-rays to try and figure out who ate the Headteachers cake.

“Robots and Machines” – Year 1 and 2 children learned about engineering jobs, and got the opportunity to program a robot to move along routes on the floor. Children were encouraged to take toys and everyday objects apart and explore how they worked.

“Feed me” – Year 3 and 4 pupils had to recreate the digestive system with equipment like a potato masher and tights.  A highlight of this exercise was meeting Rehanna from Hackney Learning  Trust’s IT department who demonstrated how 3D printing can be used to aid learning.

“iGame” – Year 5 pupils learned to code with Scratch on brand new laptops provided by iDiscover. They were introduced to a new job every day, varying from computer programmer to video game designer. They also got the chance to visit Fab Lab in London where pupils coded a robot to navigate a maze with help from Salesforce employees. 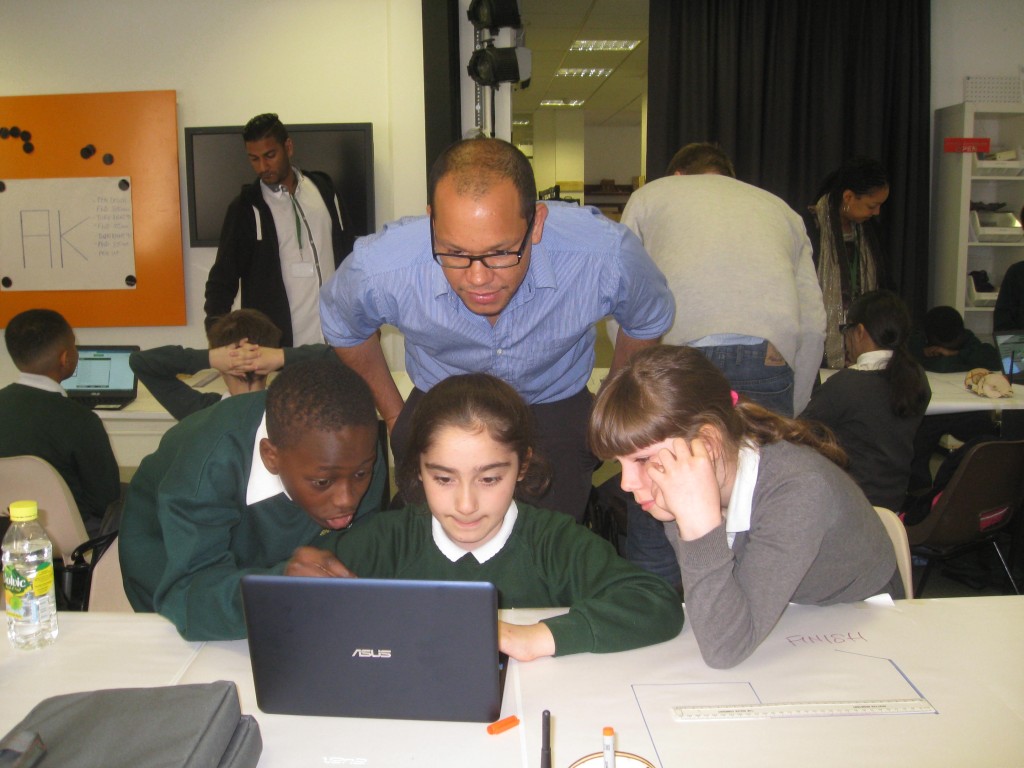 “I get it” – Year 6 pupils learned how viruses spread and were challenged to design their own virus. Pupils held an exhibition at the end of the week to explain “why we get ill” or “how we taste.

Although aimed at students, teachers also benefited from the iDiscover project, saying that it increased their knowledge of teaching STEM subjects – “Coding was taught in a creative way that was enlightening as a teacher to experience. It gave me confidence in my own teaching.”

Inspire! will spend the next few months creating new themes and building their STEM volunteer network. They already have four schools confirmed for next year and plan to deliver iDiscover to 8 schools in 2016.

The Salesforce.org is incredibly excited about the work Inspire! is doing. Lifting the lid on the world of STEM and showing young people the creative possibilities that are available, opens up a world of potential study pursuits and career paths, and works to shift gender stereotyping in STEM fields.

Read more about the projects and see how you can help on: inspire-ebp.org.uk