“World Tour Amsterdam 2014 gave us a podium to present our nature conservation dream to hundreds of potential sponsors and partners.”

We had a fantastic experience before, during and after last year’s World Tour Amsterdam, which has truly contributed to the mission of the Black Jaguar Foundation (BJF).

In the morning of the World Tour itself, we were fortunate to be part of the key note presentation and to answer several questions about the mission of the Black Jaguar Foundation.

Explaining how we work to help realize the longest nature corridor on earth and one of South-America’s largest reforestation projects was quite a challenge but our presentation was well received by existing sponsor-partners in the audience and by new sponsor-partners who we have since built relationships with.

In the afternoon, we co-hosted a BJF presentation during one of the breakout sessions together with CRMWaypoint, our sponsor-implementation partner and a Gold Cloud Alliance Partner of Salesforce in the Netherlands. Through this we were able to highlight what we have achieved using Salesforce. It was the first time we organized a presentation together and it has further strengthened our partnership with them. 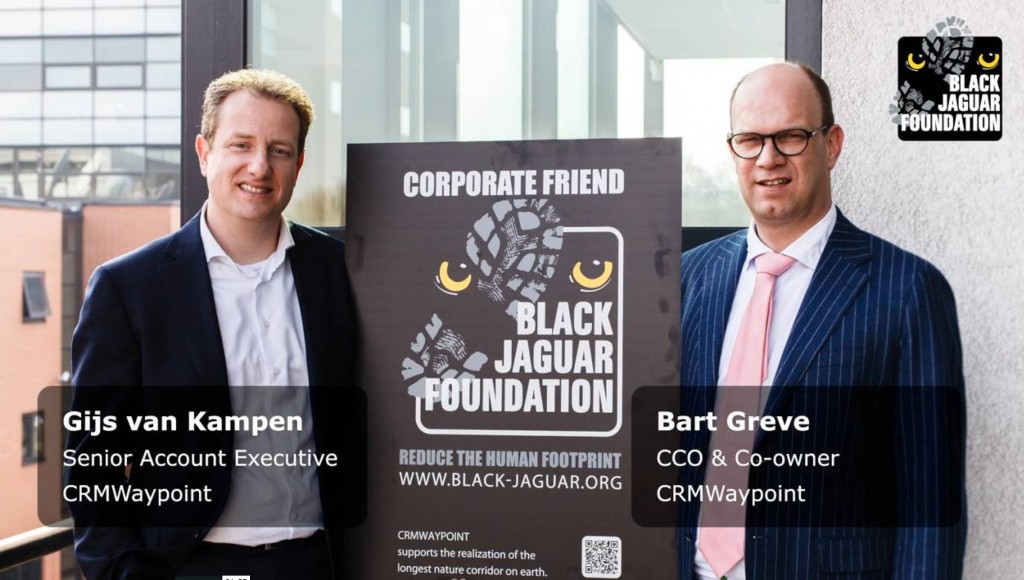 On top of that, several large potential sponsor-partners approached us after the presentation. They were interested in learning more our win-win proposal: a win for Mother Nature by sponsoring the BJF, and a win for them in terms of Corporate Social Responsibility (CSR) and its potential positive impact on their company.

Later in the day, we had the chance to discuss how these companies would build on the BJF-partnership and demonstrate their commitment to our vulnerable planet.

After learning about the Salesforce 1-1-1 Model during the World Tour, we presented the model to Belgian company VanDenWeghe N.V., a leader in high end cut-to-size marble and natural stones.

It is fantastic to see the company has now adopted the model and we were truly fortunate to receive 1% of its turnover, for a period of time following the event.

Friends of the Black Jaguar Foundation

The following month, a video testimonial was produced about VanDenWeghe NV and its support for the Black Jaguar Foundation. Since then, over 30 such video-testimonials have been produced with other BJF Corporate Friends.

We have a long way to go and we are still in need of more sponsor-partners, but with such inspiring and fruitful events such as the World Tour, we strongly believe we can make our nature conservation dream become reality.

Black Jaguar Foundation works to help realize the Araguaia Biodiversity Corridor: the longest nature-corridor on earth and one of South America’s largest reforestation projects. The work of the Black Jaguar Foundation touches the lives of all of us, as the ecosystems in the Corridor supply mankind 20% of the world’s oxygen – filter 30% of all sweet water and are the source of 25% of all modern medicines. Watch the video here>

Why not experience the Salesforce World Wour Amsterdam for yourself. Enjoy nonprofit breakouts, learn about the latest Salesforce developments and meet with potential partners and sponsors. Register today for your complimentary ticket.

Attending the event? Make sure to check out these programs, be inspired by these young innovators and maybe pick up…