Donating time and money for the betterment of others is a foundational part of the human experience. But as nonprofits become increasingly reliant on major personal donations from wealthy individuals, the task of identifying and soliciting passionate prospective donors is paramount to fundraising success.

The traditional approach to deciding which relationships to cultivate has been to focus on prospective donors based on their “wealth capacity” — meaning, the amount of money a prospect could donate. Development departments often looked at an individual’s real estate holdings to evaluate this capacity to give.

Thanks to platforms like iWave, development departments today have much more donor information, or fundraising intelligence, at their fingertips. It’s possible to learn much more about prospective donors. It’s possible to go beyond wealth capacity and consider a prospect’s propensity (inclination) to give and affinity (linkage) to your cause.

Not only is it possible to know more, it’s critical to know more. With increasing competition for funding between nonprofits, and because philanthropists consider their donations impact investments, developing a holistic understanding of your prospect is essential to presenting the right ask to the right person at the right time. 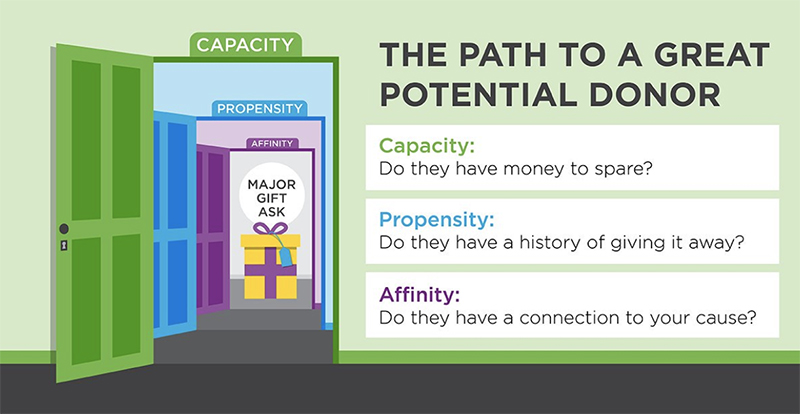 According to Giving USA, stats from recent years indicate donations from individuals made up 72% of all charitable contributions to nonprofits. Foundations made up 15% of total contributions, followed by bequests and corporations at 8% and 5% respectively. Individual giving is at an all-time high.

The process of finding those generous individuals is where fundraising intelligence, or donor research, comes into play. For each major gift prospect, there are three big questions to answer:

If the answer to all three questions is Yes, you have a great prospect. But if you are missing (or worse, ignoring) one or two of these prospect ratings, you’re missing the complete picture.

A person’s giving history (or maybe lack thereof) provides clues about that individual’s propensity, or inclination, to give to charity.

Imagine you work in the development department for a performing arts center in New York. You are tasked with researching Jane Thomas. Using a fundraising intelligence platform like iWave (or the iWave integration with Salesforce), you can quickly generate a rating of Jane’s propensity to give. Jane’s propensity rating is based on all of her associated public giving records. She may have contributed charitable and political gifts, as well as through a small family foundation.

The system returns a strong propensity rating, which indicates Jane is an active philanthropist. But does she have any interest in the arts? What about your specific organization?

Nonprofit consultant Helen Brown describes affinity, or linkage to your cause, as the most important of the three ratings for prospects. Our prospect Jane Thomas may have a strong giving history and millions available to contribute another major gift. But if she does not believe in your cause, a major gift request is likely to go unanswered.

By selecting your nonprofit category as Arts & Culture in iWave (other categories include Education, Health, Environment, Religion, and more), the system will rate Jane’s affinity based on gifts contributed to Arts & Culture organizations. Jane’s results show she contributes gifts to higher education and healthcare, but she has also made regular donations to a nearby NYC museum since 2012. With this insight in mind, is she a viable candidate to give to your performing arts center?

Now we return to capacity. While it’s critical to understand your prospect’s propensity to give and affinity for your cause, the impact of these factors is lessened if the prospective donor doesn’t have enough wealth to actually contribute a major gift.

Some of the information we can use to determine capacity include income, real estate holdings, stocks, and assets. We can also turn back to Jane’s charitable and political giving and look at the amounts of gifts she’s contributed over time.

The caveat to wealth data is that wealthy individuals are very good at hiding their assets. Mark Egge sums up capacity ratings in this way: “The capacity rating represents a rough estimate of the best possible gift we could get from the prospect, assuming our organization is their top philanthropic priority and they do not have any other negative factors limiting their ability to give. The rating takes into consideration only the information available.”

In the case of determining capacity, the more records you can find the better. Fortunately, iWave offers access to over 1 billion wealth and philanthropic records on individuals across the United States, Canada, and worldwide.

One of the best indicators for capacity is real estate. There are varying strategies to calculate capacity based on real estate holdings. Consider this tried-and-true method below:

Jane has only one property, but it’s valued at a whopping $4.8 million. Applying the formula (4.8 million x 0.10) gives us an estimated giving capacity of $480,000. However, we often consider capacity ratings over a period of five years. So in any year, Jane’s giving capacity is roughly $96,000. And that’s only considering real estate. Include capacity calculations for Jane’s political and charitable giving, for instance, and you could very well see a dramatic increase in a her estimated giving capacity. 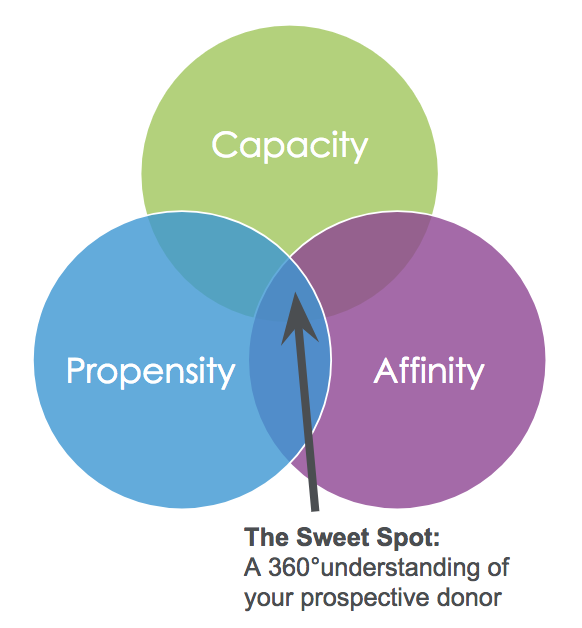 Nonprofit Fundraising with iWave for Salesforce

iWave for Salesforce brings the three keys to the forefront of a nonprofit’s Salesforce database. Enriching nonprofits’ internal data in Salesforce with iWave’s wealth and philanthropic records, the app helps you focus time and effort on your best major gift prospects. Each iWave score provides a snapshot of a prospect’s potential to become your next donor. Insights include:

With iWave for Salesforce, you can improve your nonprofit fundraising with:

1. Batch scoring: Segment and score hundreds or thousands of contacts with one click so you can work more efficiently
2. Access to Profiles: Generate a new, custom profile for their prospect, or link to an existing profile that details comprehensive donor records
3. Tailored User Preferences: Customize individual settings so they can score and filter prospective donors based on their individual goals

iWave for Salesforce is available on the AppExchange.

There’s never been a better time to find donors that have the passion, preference, and power to donate to your cause. By understanding your prospect’s giving history and wealth capacity, you can confidently present the right major gift ask to the right person at the right time. Find iWave on the AppExchange or try a demo of iWave.

GET A DEMO OF SALESFORCE FOR NONPROFITS 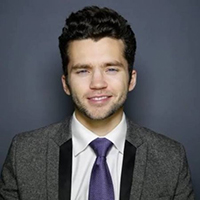 Ryan McCarvill joined the iWave team in 2016. As Content Manager, he enjoys sharing iWave’s solutions and client stories with the growing nonprofit community. Ryan is also an author and filmmaker.