There’s something for everyone at Education Summit 2022. From creating connected student experiences across departments to innovating with new business models, now is the moment to grow and thrive as a future-ready institution. Register to join us at Education Summit 2022 on April 20 and 21 for inspiring sessions, trailblazing customer stories, and new demos focused on empowering tomorrow’s institution today.

With so many returning attendees year after year, here are the top four things I hear every year about why attendees keep coming back to this event. Plus, get a sneak peek into what’s in store for this year’s education event of the year.

#1: Hearing Directly from our Trailblazing Customers

Just from our mainstage alone, we spotlight some incredible trailblazing customers, including: Arizona State University, INSEAD, University of Southern California, University of Maryland Global Campus, and Miami Dade College. Check out more details on each of these segments:

How Arizona State University (ASU) is Innovating for Learner & Institution Success
By building high-impact corporate educational partnerships and digital-first experiences, Arizona State University is leveraging a platform for innovation to drive success from anywhere. Through an engaging demo and student panel, hear how ASU’s culture of innovation is powering their purpose as a future-ready institution. Panelists include:

How INSEAD is Propelling the Future of Executive Education
Hear how Salesforce has given INSEAD the agility they need to launch new programs at lightning speed and sell efficiently across the world — all while delivering a unified yet personalized experience to each participant. Panelists include:

Advancing Diversity & Inclusion in Higher Education
Hear how three higher education presidents are harnessing the power of equity and inclusion to deliver on diversity’s promise to education and bring educational benefits, like improved cultural awareness, critical thinking, and more to their learners. Panelists include:

#2: Inspiration Overload from Around the Globe

From London to Arizona, our mainstage is jam packed with speakers bringing entirely new levels of inspiration.

Malala Yousafzai
Malala Yousafzai is a global activist and co-founder of Malala Fund, an organization working towards a world where every girl can learn and lead. At age 11, Malala began speaking out for girls’ education when she anonymously blogged for the BBC about life under the Taliban in Pakistan’s Swat Valley. Inspired by her father’s activism, Malala soon began advocating publicly for girls’ education, attracting international media attention and awards. Malala is a recent graduate of Oxford University with a degree in Philosophy, Politics, and Economics, and continues to advocate for every girl’s right to go to school.

Blake Leeper
Born without legs from a congenital birth defect, Leeper did not start racing until 2010. It was at his first ever race in Edmond, Oklahoma that he caught the attention of the Associate Director of High Performance for U.S. Paralympics Track and Field, who convinced his parents to let their son move into the Olympic Training Center in Chula Vista, California, where he started his habit of winning. That’s when Leeper left the University of Tennessee to embark on a journey that no one could envision for a kid from Tennessee born without legs.

Orion Jean
Named TIME’s Kid of the Year 2021 and the Ambassador for Kindness for organizing campaigns focused on doing good deeds for others, Orion Jean is taking the world by storm. He is the founder of the Race to Kindness Initiative. In 2020, Jean won a student kindness contest where he displayed his own campaign of compassion. “Kindness is a virtue we can all possess. If we are willing to,” he said. “So why not start today? Because right now, it’s what we need more than ever.” With his $500 prize, Jean donated toys to a Dallas Children’s hospital. Next, through food drives and partnering with a relief group, he helped collect 100,000 meals for Texas families.

With over 40 learning sessions and trainings, this year’s sessions span across seven learning tracks featuring content for every persona. Featuring institutions of all sizes, build your schedule today based on your individual learning goals. Tracks include:

On day two of Education Summit, we are offering you an opportunity to brainstorm solutions to common challenges alongside fellow attendees in our hands-on trainings and interactive labs. Sessions are available on a first come, first served basis and will take place live via Zoom at various times. To check session availability, visit the session catalog.

#4: A Gathering Full of Celebration!

You’ve voted for your colleagues and leaders, and now we are tallying the winners in each category. Be sure to stay tuned on the main stage for the announcement of winners. Check out the finalists, which span across seven award categories.

We are so excited to see YOU on April 20-21, 2022. Come for the celebration, stay for the trailblazing customer stories, new demos, A-list talent, and industry thought-provoking panels and roundtable discussions. Register Today to attend. 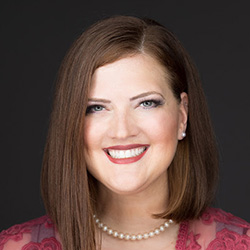 Traci leads the global events strategy for Salesforce.org. A strategic leader with more than 15 years of event management experience, Traci loves the opportunity to create meaningful, memorable, and awe-inspiring event experiences for Salesforce.org’s nonprofit and education customers. A proud Texan by birth and a proud graduate of the Masters for Executive Leadership program from the University of San Diego, she now lives in San Diego with her husband, two cats (Bonnie and Clyde), and two dogs (Thelma and Lousie).