Looking Back to See the Future of Higher Education 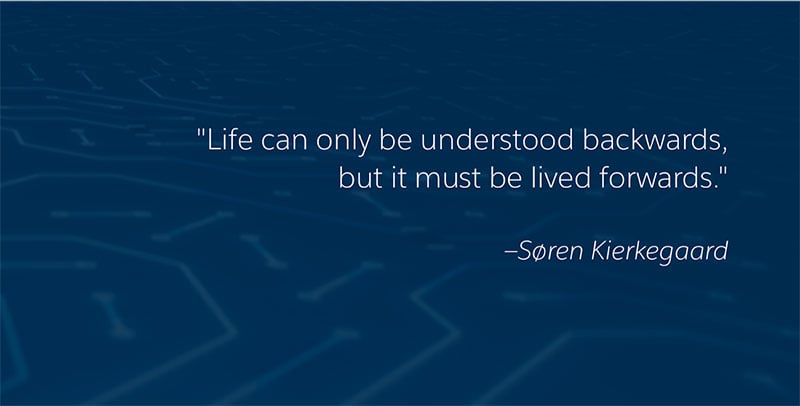 There are a lot of top-10 prediction lists floating around this time of year. While it’s nice to know what’s to come, it’s also wise to look back to uncover patterns, learn from mistakes, and take a moment to be proud of how far higher ed has come. In taking this mindful approach to a new decade, I think we can then create a map for the future, celebrate and connect as a community, and look for the big areas of opportunity.

Looking back, when the Great Recession hit in 2008, it made people think differently about the value of higher education. In fact, did you know that college enrollment has increased in every recession since the 1960s? Because jobs were hard to find, people found that enrolling in college could teach them new or different skills to enable them to re-enter the workforce.

The Great Recession and the years shortly following became a pivotal moment for higher ed. Colleges and universities felt the weight of preparing students for work during and beyond a tumultuous economic downturn. And they also saw demographics shift — older learners working full- or part-time became more of the norm. These emergent learners didn’t view higher education as the traditional four-years of episodic learning. Instead, they faced a new reality where workers require constant upskilling and reskilling to thrive in an increasingly dynamic labor market.

In response to these new economic realities and shifting demographics, online learning has emerged to expand access to education. In 2000, only 8 percent of students were enrolled in an online course, but by 2008 enrollment had increased to 20 percent, according to the National Center for Education Statistics.

By 2012, the impact of online learning on education could no longer be denied, with about 5.5 million students worldwide taking at least one class online, according to the Education Department. And the numbers continue to grow every year. Now, more than a third of college students are taking at least one course online.

With so much growth in online learning, it’s important to note that college completion still matters. Between 2010 and 2019, the labor market consists primarily of those with bachelor’s degree or above (15 million workers), according to Thomson Reuters.

Digital transformation in higher ed is no longer a nice-to-have. It’s a must-have.

Given these major shifts from the past decade, digital transformation in higher ed is no longer a nice-to-have. It’s a must-have. By innovating and connecting with students in seamless, personalized ways, institutions can deliver more impactful and relevant learning experiences. I see the following four categories as being the biggest opportunities for the future.

If higher education is to truly seize the opportunities offered by digital transformation, it must become more willing to think outside its incumbent boxes. The digital economy doesn’t conform to a traditional 9-to-5 weekday schedule, and neither should higher education. It’s time to rethink fixed-start dates, 15-week semesters, 3-credit hour courses, and 9-5 office hours. Thinking outside these boxes isn’t easy, but we already see promising alternatives, especially at community colleges and fully online institutions where flexible start dates, 6-week courses, and bootcamps are in motion.

Moving to the cloud becomes a bigger priority

Whereas IT once ran all technology systems on-premise, institutions are slowly but surely moving to the cloud, with overall spend doubling from an estimated $1.4 billion in 2018 to $3.2 billion in 2022, according to a report by Ovum. For many, the practical path forward is a hybrid approach, as it can be very difficult to rip and replace a school’s legacy systems. Instead, extending onprem systems with cloud services and combining these with other cloud-based systems will decrease the burden of maintenance on the institutional IT staff and enable more opportunities for innovation.

Analytics remains an important area of investment for schools for 2020, with an overall growth score of 35 percent since 2018, according to Ovum. In fact, 61 percent of all institutions ranked analytics as one of their top three project categories for the next 18 months, with 24 percent of the institutions surveyed ranking it as their top priority. Analytics capabilities are now embedded into nearly all new vendor offerings (ERP, LMS, CRM, etc.), thus increasing ease of adoption for non-technical users and reducing the pain of integration. As institutions seek to engage students in personalized ways, they’ll rely on analytics solutions that can be seamlessly integrated into their system.

AI is here to stay

While AI is currently influencing strategy at only 13 percent of colleges and universities, according to research at EDUCAUSE, interest in AI will be high in 2020 as colleges seek to improve enrollment, as well as help give students advice and counsel.

At Georgia State University, AI assisted high school students in their transition to college, reducing summer melt by 21 percent, which meant 324 additional students showed up for the first day of fall classes. The university’s conversational AI system supported college-bound freshmen by answering questions, 24/7, such as “when is orientation?” and “Can I have a car on campus?”

All of these opportunities to innovate and transform will be discussed in depth at Higher Ed Summit 2020 in Indianapolis, April 29 – May 1. Register today to connect with your peers and learn how they’re creating a brighter future of higher ed.