Interview with Bryan Stevenson: On Juneteenth and Justice

What is the Opposite of Poverty? Bryan Stevenson says, “It’s Justice.”

Salesforce.org sat down with Bryan Stevenson, founder of the Equal Justice Initiative (EJI) and author of Just Mercy, a book about his fight to help those wrongfully convicted on death row. The book was so popular that it was also made into an award-winning hit film.

Stevenson spoke at last year’s Salesforce.org Education Summit where he shared jarring statistics, including that one in three black male babies in this country is expected to go to jail in his lifetime. Stevenson is a lawyer who graduated from Harvard Law School and started EJI to dedicate his life to fighting the unequal treatment of marginalized communities. He is committed to changing the narrative on race in this country to help us truly understand who we are.

In this interview, Stevenson shares his thoughts on how we seek to reconcile as a nation, how he personally handled prejudice and racism, his path to his true calling, and how he finds the strength everyday to keep on fighting. Because in his words, “hope is a superpower.” 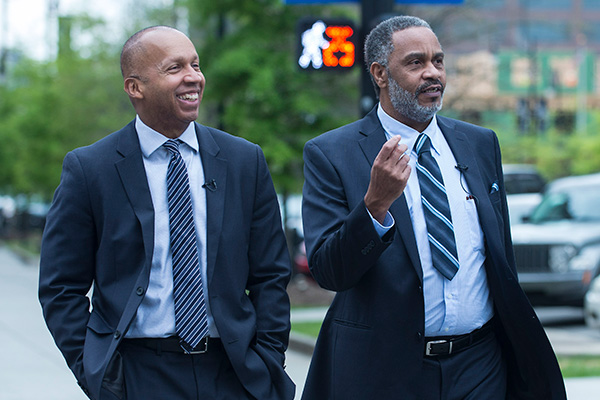 Bryan Stevenson (left) with one of his clients, Anthony Ray Hinton. Mr. Hinton was wrongfully convicted and spent almost 30 years on death row in Alabama. He was exonerated in 2015.

Q: How do we balance the importance of celebrating and honoring national moments — like Black History Month and Juneteenth — with the realities of how far we still have to go?

Bryan Stevenson (BS): It’s important that we have a new consciousness about the problems created by our history. The activism we saw in 2020 was a powerful way of expressing our need to do better in this country, and across the globe.

The mistake will be if we just look for easy things to celebrate. Juneteenth is both an occasion for celebration and a moment for reflection.

In many ways, Juneteenth was a tragedy. Enslaved people were so disrespected that those who enslaved them didn’t even tell them that they were free for months after the South had surrendered. So while it was an extraordinary moment, there is so much about our history that we’ve got to change.

In the United States, most children are taught that Christopher Columbus discovered this continent, that we created freedom and democracy. We tell a wonderful story about our evolution. When we teach history in the United States, we often skip the parts that are not so wonderful. When you do that, you don’t have an honest understanding of who you are. We are a post-genocide society, and we’re going to have to reckon with the multiple ways in which we exploited and destroyed tribal communities. We’ve got to talk about what that means if we’re really committed to justice.

The legacy of slavery was this narrative of racial difference. I’m still burdened with this presumption of dangerousness and guilt, despite my education, and what I’ve achieved. For example, early in my career, I arrived in the courtroom to defend a client early and I sat down at the defense table, and a judge came in and saw me. He said to me, angrily, ““Hey, you, get back out there in the hallway. You wait until your lawyer gets here.” I had to apologize and clarify that I was the lawyer. The judge and the prosecutor started laughing and I had to make myself laugh so I wouldn’t disfavor my more vulnerable client. Afterward, I thought, here I am, a middle-aged Black man with all of these degrees and honors. And I’m still required to laugh at my own humiliation to do justice for my clients.” That’s what has to change. So what can we do? Learning is the action item. When we learn, we actually commit to doing things that position us to get better. We have a calendar at EJI where we put out an action you can do everyday.

Q: In your book, we learn that you found your calling quite young when you visited a death row inmate during your summer internship for law school. So, especially for young people reading this, how do you find your calling so young and how did you channel your feelings around injustice into this calling?

BS: I think particularly when you’re young, you should seek purpose. You should seek a mission. We’re all on this planet for a reason, and we should seek out that reason. It’s not always obvious.

Getting proximate to the problem was where the real transformation was. Going to death row and meeting someone who had been condemned, who told me that my presence there gave him hope. At the time, I didn’t think I was anywhere near prepared to help somebody on death row — we were the same age. We started talking and spent several hours together. As I left, the guards came in and really treated him roughly. They put handcuffs on his wrists, wrapped a chain around his waist, put shackles on, and started shoving him towards the door. And this condemned man turned around and said, “Bryan, don’t worry about this, you just come back.” Then he did that extraordinary thing where he closed his eyes and threw his head back and started to sing.

What will keep you calm when you’re having to confront all of these things is to know that it’s not just about you. I’m standing on the shoulders of people who did so much more with so much less. My grandparents were enslaved. When slavery ended, they had every reason to want retribution and revenge, but they knew that it wouldn’t sustain them. They knew that to be healthy, they had to opt for something more enduring, like love and fellowship.

My grandparents fled the South with the terror and trauma of lynching, and yet they held onto their capacity to love. I grew up during the segregation era, my parents had to see those signs that said white and colored. They weren’t directions. They were assaults. They created real injuries and yet they had enough love to give to their children. They believed in the power of education.

Q: Let’s talk a little bit about the individual actions that people can take. How can anybody — an ally or person of color or a member of the Black community — do as you recommend in terms of getting uncomfortable with truth-telling?

BS: Getting uncomfortable really begins with learning, with education. We have such a deficit of knowledge about how we came to be where we are. Take the Holocaust Memorial in Berlin. They don’t have any signage to explain the Holocaust. There’s an assumption that people know what happened, and they can interact with that abstract memorial in a really powerful way. When we built our National Memorial to the victims of lynching, we couldn’t do that. We couldn’t narrate the history in a way that people would understand what this represents, because you can’t assume that people know anything about that legacy.

We can’t assume that people know about the 41 states that banned you from loving another person of a different race. Most people in this country haven’t thought about the fact that, in most of the United States, you were not allowed to marry someone of a different color. You would be imprisoned if you did that. That was true in the 20th century.

Without that knowledge, we misinterpret, we misunderstand what the manifestations of racial bias means today. So learning is the first thing. Then we have to make the journey. When I was a little boy, everybody went to DC to see the Capitol sites. I want everybody to come to Montgomery to see our sites.

It’s an important counter-narrative that has to be heard if we’re going to understand who we are in this country, what we’ve done in this country. With that knowledge, we can look for new ways to share what we know between each community.

We have a project where we put up markers all across the country at lynching sites. We have projects where we facilitate educational conversation around the legacy of this history through movies. All of those opportunities are waiting for anybody motivated to do something about these issues.

Q: Let’s talk about the evolution of EJI. Your mission and your mandate probably looks different than it did this time last year. As both a leader of a nonprofit, and someone who drives the movement, what’s changed? What’s growing and diversifying?

Thousands of people died because of inequality and injustice because we have not confronted our history effectively. That has just intensified our desire to do the things that must be done to create a healthier future.

We’re opening a brand new space in the fall that will expand on the work and the experience that people have when they come to our sites. We’re issuing more reports. We’re representing more people who’ve been wrongly convicted and unfairly sentenced. We now have a curriculum and new content for educators. We want corporations and companies to participate and feel like it is their obligation to be part of this effort at truth and justice. We want the institutions that have contributed to inequality and injustice to acknowledge the ways in which they have failed and commit to succeeding in the future.

Q: I want to ask specifically about something you said about corporations participating in that movement. With the power behind brands and companies, what can they do to help further the movement?

BS: We have to be willing to acknowledge the ways in which we have contributed to the problems. The way forward is to take a step back and assess who we are and our relationship to the problems that we still have. I don’t think there’s any corporation that can say they have no responsibility, or that they’ve done nothing to contribute to these problems. That’s just not possible.

If there’s an honest desire to make a difference, you have to be willing to make that assessment. Once you can identify what you’ve done to contribute to the problems, there needs to be a discussion about what needs to happen to stop doing that, and to instead contribute to solutions. That’s going to mean doing some things that are uncomfortable.

It would mean doing things that are not about just advancing revenue. It’s committing those things because we recognize that to succeed, we need to be in a healthy community.

Sometimes a healthy community requires that we give back not because we make more money, not because it increases profit, but because it is necessary to create the conditions that allow a corporate entity to actually be honorable, and appropriate, and effective.

I don’t think our society can sustain another century of the indifference to inequality and injustice that we have lived through.

We will not succeed as a nation, as a planet, if we’re not more attentive to the threats to healthy communities. Whether that’s climate change, or racial inequality, or income inequality, we have to become active on these issues.

There are companies that have done that, and those companies could be models for others that are looking to make those changes themselves. Companies can become part of a cohort that’s saying, “we have to contribute to the justice culture. We have to look for ways to create healthier communities.”

To learn more about EJI, please visit their website. If you want to start your path to learning, and supporting EJI in their work, you can sign up for their calendar or donate today.