Inspiring Youth Through Music: An Interview with LT Smooth

“How can we make a difference with what we have?” –LT Smooth 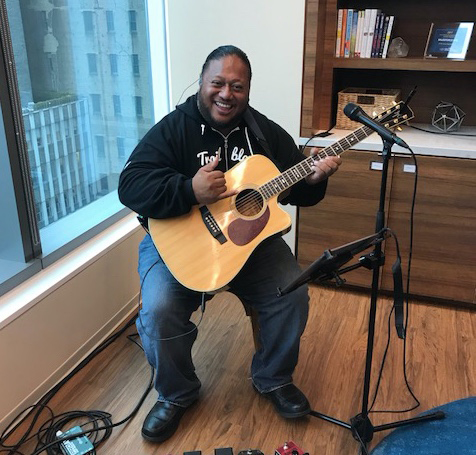 You might recognize LT Smooth as a frequent performer at Salesforce events and member of our Salesforce community, but who is the man that shares his incredible talent with us? He’s a musician who defeated impossible odds to pursue a dream, and is now on a mission to share his hope and positivity with children around the world.

Growing up in New Zealand, LT Smooth endured a tumultuous childhood. He shared that music has been a healing and liberating tool, allowing him connect profoundly with kids who experience difficulties similar to what he went through. “I haven’t been to school since I was 8 years old,” he said. Along with his two brothers, he was kicked out by his father and by age 9, entangled in a life of drugs and violence. Sadly, he eventually lost both brothers and his father to related struggles. He lived a life of isolation, battling addiction and even doing time in prison. At age 19, he recognized a need to change his destructive behavior and sought help from his mother, who helped him leave New Zealand for an Australian missionary organization. He spent the next three years there. LT Smooth’s time at the convent would prove to be transformational — it was both where he discovered his love of music, and chose to become a missionary. While some may have ended up angry and bitter as a result of extreme difficulties like the ones he experienced at such an early age, LT used his circumstances to remake himself — and is now committed to helping youth transform their lives. “I’ve been on a mission with youth,” he said.

The Saving Grace of Music 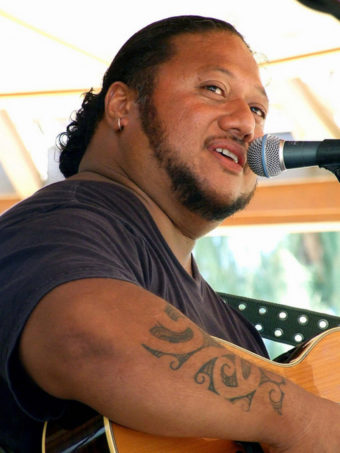 Some people say LT Smooth’s music sounds like that of Israel Kamakawiwoʻole (also known as Braddah Iz), who is a major source of inspiration on the Hawaiian islands. Like Israel, LT “came from nothing as well, but he kept writing music, stood up for his people; he had a voice.”

Since discovering music in his late teens, LT Smooth has continued to teach himself instruments. “I play 19 instruments now – I didn’t know it was a gift,” he mentioned. Amazingly, he became a musician without any formal training: “I just watch everything on YouTube and teach myself how to play music, and studied how to read music on my own. There are probably 50 ways of tuning the guitar – I know 15. It’s not just A 440 tuning (from traditional Western music) – there is innovative tuning; Hawaiian tuning.”

While he had musical talent, he had difficulty getting a job in music because “no one knew who I was.” In 2000, he moved to Hawai’i, but couldn’t get a job in the music industry immediately, despite experience running a music studio in Australia. He became a fish cutter, and did some construction on the side to make ends meet. It took him 7 years to have a name behind him, and in 2007, he recorded an album and was nominated for 5 Grammys!

Despite being nominated for 5 Grammy awards and being in a Hawaiian compilation album for the year called Slack Key Kings volume 2, he felt a higher purpose stirring him. He thought about teaching kids how to play music, and his dream grew from there: “I knew it was my calling, and never stopped,” he said. 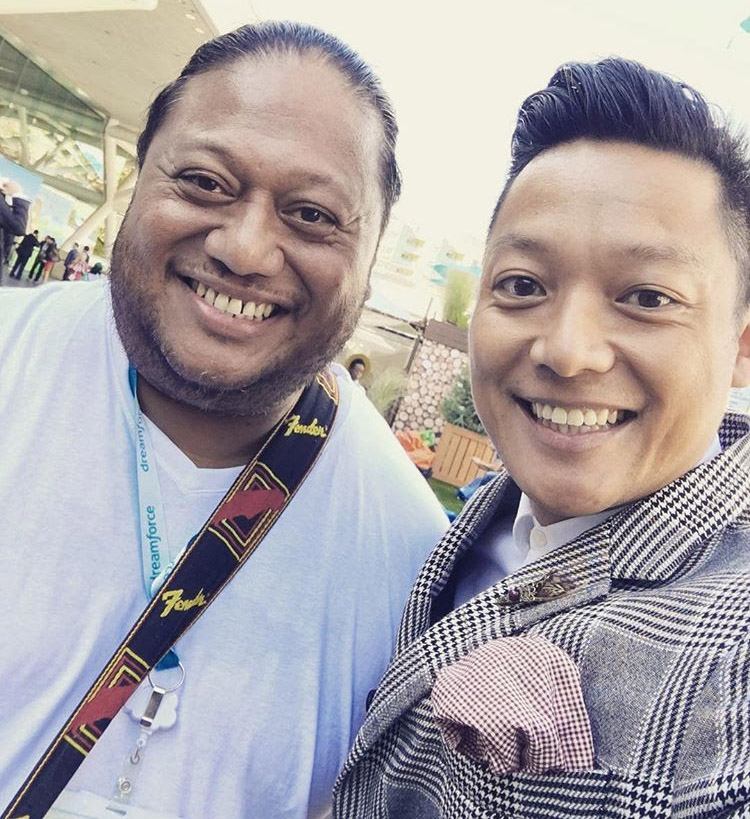 You may be wondering, how did a kid born in New Zealand end up meeting Marc Benioff? LT Smooth shares:

“We have a lot of agencies on the Hawaiian islands. The catering firms who do events for people like Marc Benioff and Charles Schwab, that kind of thing. One time a band didn’t turn up and someone suggested, ‘You should try LT Smooth.’ So I got an invite to come to Marc’s house and play! I told Marc a little bit about who I am, and how I love helping kids, and it started from there. Marc kept inviting me to play at events! When I met Marc, it was about the connection we had: he was changing the world with what he knew, and I was doing the same with what I knew. We come from two different worlds – the school of hard knocks, and having an education.”

It’s not just about playing music at events, though. For LT, Salesforce is a bigger family for him, because the people closest to him died when he was so young. 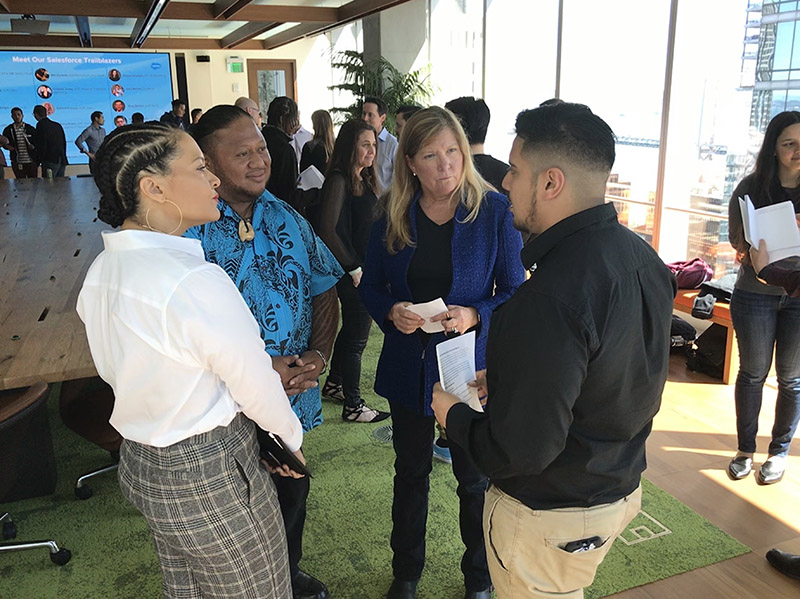 “Marc Benioff is like a father figure to me because I never had one.”

What Salesforce Means to Him 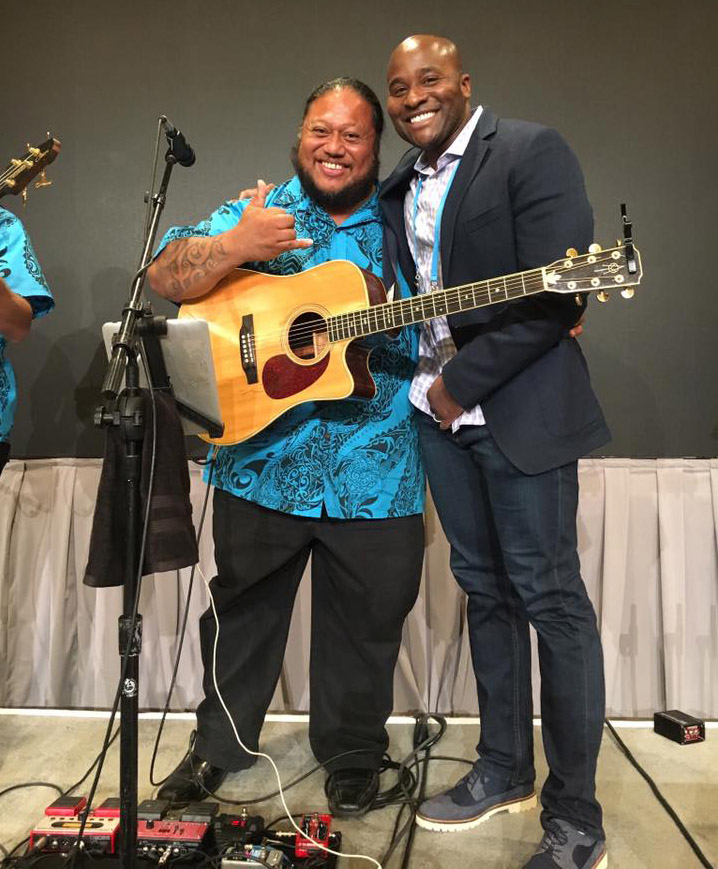 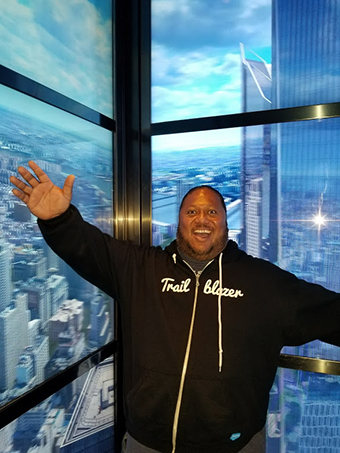 LT continued: “I never had someone who inspired me. Marc is the one who has inspired me so much that I want to keep pushing as hard as I can to make a difference with what we have. Having Marc accept me as part of the Salesforce events – it opened more doors for me. I have a commitment to say thank you for every tour or performance, for the platform…to not just play music but to talk about my past and vision for helping youth.”

For LT, the Salesforce community means his message of hope can go out “20,000 times faster to the world. I would never reach kids without it. Salesforce is an amazing platform for apps and people to create what they need, and with music, I do the same thing. At Salesforce, you’re raising ambassadors – I want to raise ambassadors from kids who haven’t done anything in life.”

With the money that LT saved from his Salesforce events and tips from playing music at other events, he bought 2 acres of land and started turning his vision into reality. For a year he started preparing the land by hand, and through the diligence of consistently saving, year after year, he bought an excavator machine to start the process of building a home for kids and a school of music in Kailua Kona, on the island of Hawai’i. “The whole property is because of people’s generosity, and because I was faithful in putting the money away.”

Why does he do what he does? “I believe in change,” he said. “It’s not about giving kids the instrument; the music is in them. It takes the instrument to get to their soul, heart, to change their lives from drugs and violence.”

What’s interesting is that it’s not just about teaching kids music: “I’m using music as a tool to change their lives because there’s something bigger after that. I’m going to teach them how to cook, weave baskets, and have skills.” With kids that are bullies, who are angry and violent, he is teaching them other ways of handling themselves. “When you get angry, how do you deal with it?” he said. 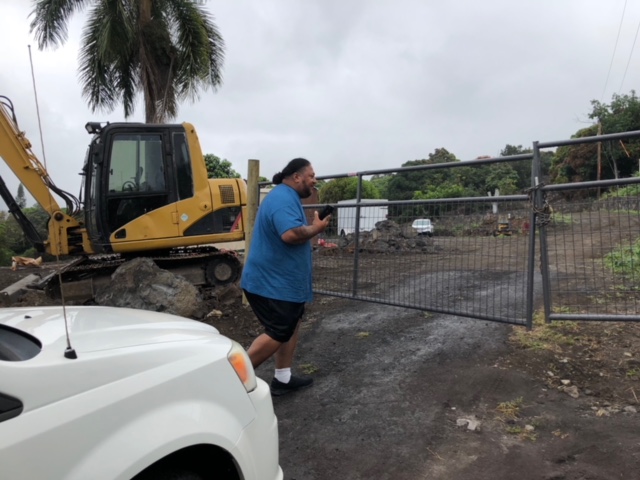 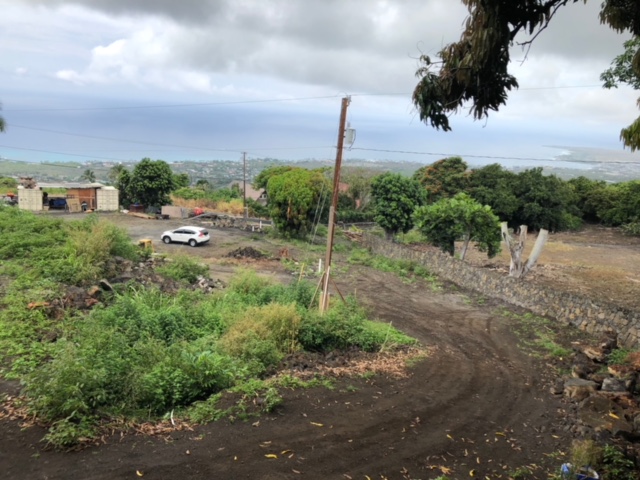 Where LT Smooth is working on building housing for students with the Heart of Music Academy.

For anyone who wants to get started in music, for fun or as a career, LT advises: “Surround yourself with people that make you better as a musician.” But it’s not just the music: LT challenges us to think bigger. “You need to come up with something better that will change the world we live in,” he said. “What can we do to make this world better?”