How Higher Education Leaders Are Demystifying the Future of Work 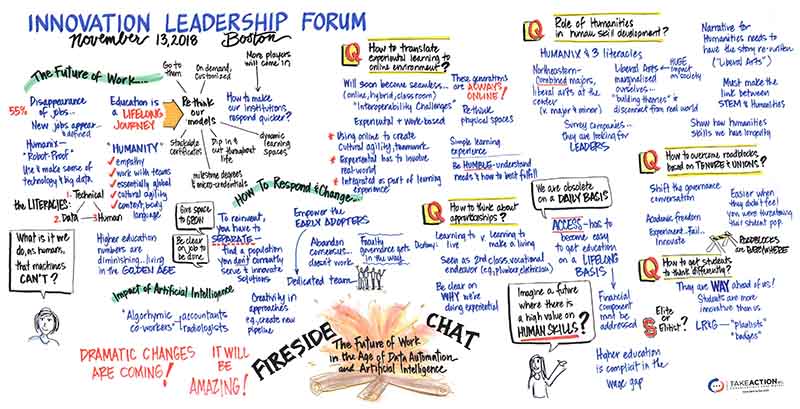 “The mission of higher education now is to help students become robot-proof,” said Joseph Aoun, President of Northeastern University, and author of Robot-Proof: Higher Education in the Age of Artificial Intelligence. “Every learner now has to be able to interact with machines, learn how to grasp data, and do things that machines can’t, such as be empathetic, creative, and entrepreneurial.”

Why address this now? The World Economic Forum has reported that 65% of students entering college this year will ultimately be working in jobs that don’t currently exist. To be prepared for these opportunities and challenges, over 80 University Presidents, Provosts and other higher education leaders and influencers attended the New England Innovation Leadership Forum on November 13 with Salesforce.org, co-hosted by Dr. Paul Leblanc, President at Southern New Hampshire University and Dr. Joseph Aoun, President at Northeastern University.

The following is a summary of four ways that colleges and universities should respond and prepare students for the ever-changing work landscape, which is being driven by data automation, machine learning, and artificial intelligence amidst the fourth industrial revolution. 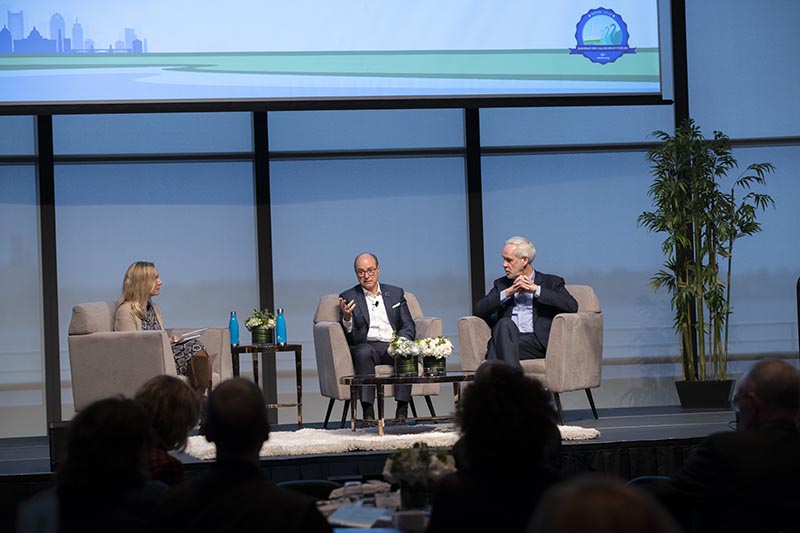 Fireside Chat on The Future of Work in the Age of Data Automation and Artificial Intelligence, with Dr. Paul LeBlanc, President at Southern New Hampshire University, Dr. Joseph Aoun, President at Northeastern University. Moderated by Beth McMurtrie, Senior Writer at the Chronicle of Higher Education.

The era of the 18-year-old full-time undergraduate is shifting towards colleges with more working adults who are also attending college part time. Nationwide, nearly half of all college students are 24 or older and already working, and 76% of students qualify as adult learners.

For colleges to thrive, they should embrace lifelong learning programs that allow workers to continually upgrade their expertise — including “micro-credentialing” — to help them learn new skills.

Affordability issues may be a constraint here, since employers are often averse to paying for education benefits that may not help their bottom lines in the long run. And the federal government has largely been uninvolved in helping older students pay college bills.

“Singapore and several Scandinavian countries have national policies that support lifelong learning,” Aoun said in an interview conducted before the forum. “In the U.S., our policies have been too restrictive. We need to extend financial aid throughout the lifetime of a student.” 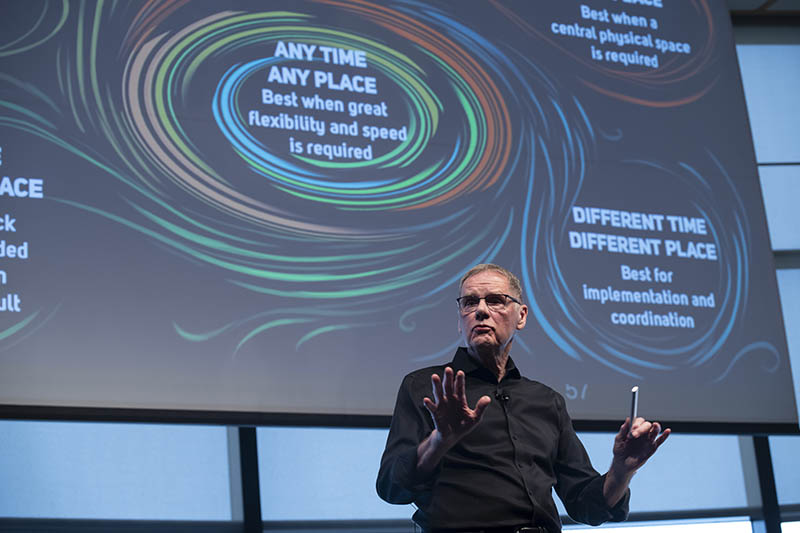 According to a recent survey by Inside Higher Ed, a majority of admissions directors say they were very concerned about meeting their school’s enrollment goals. With increased pressure to recruit a full class, some colleges have put their energies behind developing their online education programs, which include time-stressed adult learners.

“Our online student population has an average age of 32,” said Paul LeBlanc, president of Southern New Hampshire University. The school includes 135,000 online students from around the world. Eighty percent of them are continuing education students. “They often work full-time and have kids. They find themselves stuck in the professional world. They just need a credential to get to the next level.”

To deal with the “seismic changes” LeBlanc sees that are upending the nature of education, college leaders would do well to find newer groups of students who can help their institutions grow. “You need to find populations you don’t serve,” LeBlanc said. “We’ve focused on reaching refugees around the world. More institutions need to target adults who have children and jobs.”

3. The Advent of AI Increases the Importance of Humanities Education

As Aoun’s book notes, a “robot-proof” education helps students be flexible and creative to invent, discover, or create new innovations. Students will need data literacy to manage the flow of big data, and technological literacy to know how their machines work, but human literacy – the humanities, communication, and design – is even more important to adapt to change.

“We may be on the cusp of the revitalization of humanities because it facilitates the critical skills necessary to lifelong learning,” said Aoun. “And in the job market of the future, skills having to do with creativity, critical thinking, and synthesis will be highly desired. All lead back to the humanities.”

He cites the experiential learning programs at Northeastern and elsewhere as one way to use those three skill sets to engage students more meaningfully in their future careers. “They give students a context, a chance to integrate what they learn, and puts faculty and learning at the center.”

It also gives colleges the chance to develop partnerships with companies that will help educate their students and, often, pay them for their work. “We have worked with companies to find out what they want out of their employees, which helps us to formulate our education plans,” said Aoun. The partnership has also given universities some guidance as it creates new types of degrees aimed at solving real-life problems in the workplace. 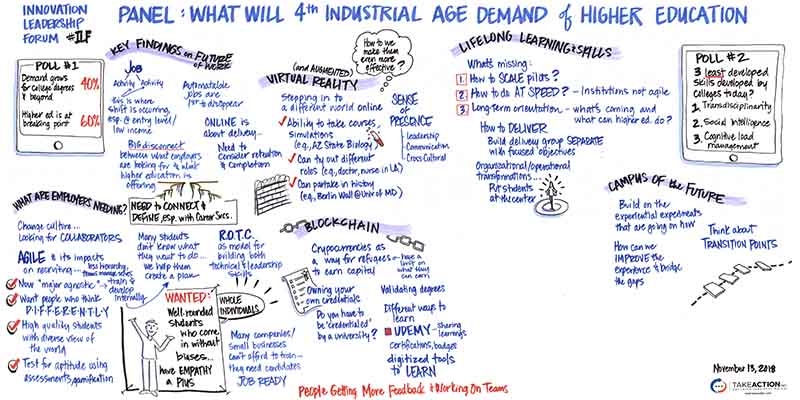 One thing new technologies excel at is getting the attention of the next generation. Innovations involving augmented reality and virtual reality can fulfill young students’ desires for deeper experiences, while preparing them to use and develop such technologies in the classroom and the workplace, says Maya Georgieva, a futurist and the digital director at The New School.

“We’re heading toward the age of experience, when students will want to have experiences on demand, and that includes virtual reality,” she said.

Students in biology labs at Arizona State University are doing their lab work in a virtual space. Some universities are partnering with hospitals to teach students via simulations that use augmented or virtual reality tools. Early studies have found that learning retention rates improve by up to 10% when students are allowed to use virtual reality programs, Georgieva said.

Unlike previous generations, students will have to be masters of many kinds of consciousness, LeBlanc concurred: “This coming generation will live in a blended reality, virtual and otherwise. They won’t have the choice to be offline.” 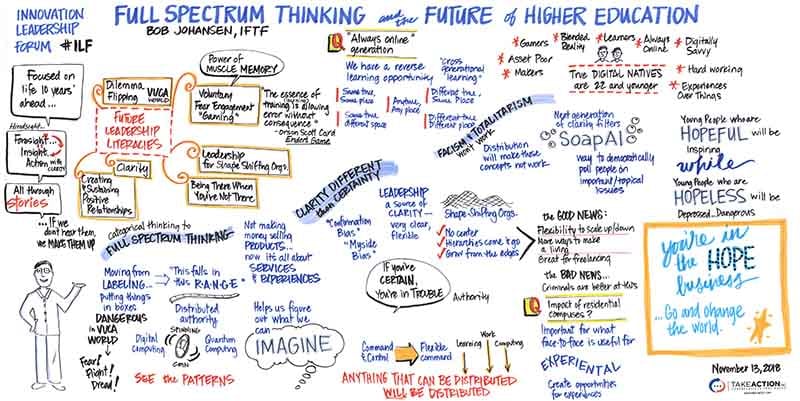 “Those who are 22 or younger right now are better at most everything we adults can do, except for face-to-face relations,” said Bob Johansen, a distinguished fellow at the Institute for the Future, a Palo Alto, California, think tank.

And they are likely to take newer types of virtual reality technology even further — and higher education along with it. “Ten years from now, we’ll all be gamers,” Johansen told the audience. “What we think of video gaming today will become the most powerful learning medium in history.”

Peering into the crystal ball is rarely comfortable, panelists said, but among institutions that tend to change slowly, such discussions have never become more important.

“Universities are really good at looking in the rearview mirror — to say, ‘We’ve always done it this way,’” said LeBlanc, in a separate interview. “It really helps us to align ourselves with people who look toward the future.”

At stake for colleges are self-preservation — as Amazon, Google, and other large companies begin to look into offering higher education — and the relevancy they currently offer students.

“Higher education has always taken on big challenges. Unfortunately, it has often done so in a siloed way,” said Aoun. “Becoming robot-proof is a long-term journey. Our whole focus needs to be on this: If we compete with machines on their turf we’ll lose. If we compete on our turf, we can win.”

Learn more in the The Chronicle of Higher Education’s Insight Report from the New England Innovation Leadership Forum.