Force Multiplier is a new six-part original podcast series created by Salesforce.org and iHeartMedia to highlight the exponential impact that businesses, educational institutions, and nonprofit organizations can have on the world by working together.

Uniquely positioned at the intersection of these three sectors, Salesforce.org has seen up close that the scope of our impact depends on the strength of our partnerships. In each episode, Emmy-nominated host Baratunde Thurston will dive deeper into these relationships, talking with leaders from the public, private, and nonprofit sectors about how they’re forging dynamic cross-sector relationships to take action on some of the biggest challenges facing us today.

In the first episode, which will be released on all podcast streaming platforms on August 12, Dr. Kyla Johnson-Tramell from Oakland Unified School District and Gita Rampersad from Feeding America discuss the complexities of nutrition insecurity. Other episodes explore health inequity, workforce development, climate change, and the opportunity gap in education.

I asked Thurston for a behind-the-scenes look at what it was like creating this new podcast, and what he took away from his conversations with these inspirational leaders:

Force Multiplier is a new podcast created by Salesforce.org and iHeartMedia that spotlights the exponential impact we can have on the world by working together.

What drew you to the concept behind this podcast?

Baratunde Thurston (BT): Collaboration! We are, I hope, leaving behind the era of “I alone can fix it” and acknowledging that we are in an all-hands-on-deck situation with regard to the challenges we face. They’re way too big for one person or one organization to take on. We need to approach these challenges as a team with multiple parties bringing their unique skills to the table and coordinating with other players. It doesn’t hurt that I’m watching the Olympics and have a bit of team fever going right now.

Is there a specific conversation or topic that has stuck with you or that you’re excited about exploring?

BT: Dr. Johnson-Trammell from the Oakland Unified School District was amazing. So many people in positions of public trust have been beaten down by this pandemic, but she managed to coordinate an effective response to heightened nutrition insecurity, and she’s re-upped her commitment to the district with another term of service. So inspiring.

I’m very excited to explore climate change since to me that’s the biggest issue requiring the most collaboration. We literally cannot do enough to reduce the harmful impacts of our effect on the climate.

Did anything end up on the cutting room floor that you wish you could go back and explore further?

BT: I want to spend more time exploring how people’s conceptions of others change after building a working relationship with them and how their own roles evolve after such exposure. I’ve seen a lot of judgment and defensiveness in these multi-sector efforts: people in government don’t trust folks in business; folks in business are impatient with or dismissive of government and nonprofit service; nonprofit folks show contempt for government, etc.

The cycle can be very destructive. But for those who’ve forged constructive relationships, how have they themselves changed or been humbled? What new perspective do they have on these partners who might have before just been seen as the “other”?

What do you think podcasting as a medium brings to complex conversations like these?

BT: Intimacy. There have been no shortage of conferences addressing similarly complex topics. Often, those are panel formats with limited time and lots of public performance pressure. Podcasting lets us get closer and spend more time going deeper. Or at least it has a greater chance to do that.

What’s next for Force Multiplier?

BT: Either more force or more multiplication. My vote is for the latter. We’re serving up a handful of examples of the types of collaboration that can help us take on big challenges. I hope people listening are inspired to find or create their own examples to move us all forward.

Subscribe now to the Force Multiplier podcast, which launches on August 12 and will be available for streaming on all podcast platforms. 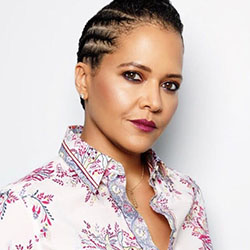 Cristina Jones
Chief Engagement Officer at Salesforce.org
As Salesforce.org’s Chief Engagement Officer, Cristina tells world class stories that elevate the mission for the community, employees, and customers.
A storyteller at heart, Cristina launched Salesforce’s Leading Through Change series, with weekly episodes reaching millions of viewers. In 2020, Cristina was named to the Ebony Power 100. She was also named one of 60 women featured in the World Woman Foundation’s #WorldWomanHour #ShesMyHero campaign highlighting women fighting against stereotypes to promote ideas that change the world.

Read about the three main takeaways from the first ever Zero Hunger Summit, hosted by Salesforce during Dreamforce.

Higher Education How To Wow Your Students for Lifelong Success

Read about our mission of helping institutions around the world build for the future of education, and “wow” every single…

Higher Education How to Double Down on People-Powered Philanthropy

In this blog, you’ll read about a list of principles for optimizing people-powered philanthropy in a post-pandemic world.