Radical Collaboration is Our Best Chance to Fight Climate Change

Every topic we’ve focused on throughout the inaugural season of Force Multiplier has had a single common thread: the imperative for cross-sector collaboration to solve a big problem. With the future of our planet at stake, there’s no greater urgency for innovative partnerships and creative solutions than around the topic for the final episode of season one: climate action.

By now, we all know that July was the hottest month in recorded human history. We’ve seen the heartbreaking news stories over the last few years about how the American West has been ravaged by drought-fueled wildfires. We’ve seen the reports of Arctic glaciers that are melting at an alarming rate. And we’ve watched helplessly as hurricanes and tropical storms have intensified in frequency and strength.

These are all sobering reminders that climate change isn’t just a distant threat anymore — it’s happening now. It’s no longer a question of whether the impacts on the environment of our collective human actions over decades will continue to result in more extreme weather, natural disasters, and economic instability. Dodging the proverbial bullet is not an option. But it’s not too late to mitigate the disastrous effects that we’re starting to see, and doing so will require immediate, decisive, and expeditious action.

In episode six of the Force Multiplier podcast, host Baratunde Thurston goes in-depth with two leaders who serve as beacons of light, showing us where to begin and giving us a reason to be hopeful about a bright future for our planet. Birgit Cameron, co-founder and head of Patagonia Provisions, is passionate about the integral role that nature — and specifically soil — will play in saving our planet. Jennifer Morris, CEO of The Nature Conservancy, is a self-described “impatient optimist” who believes in radical collaboration to create tangible results that last. 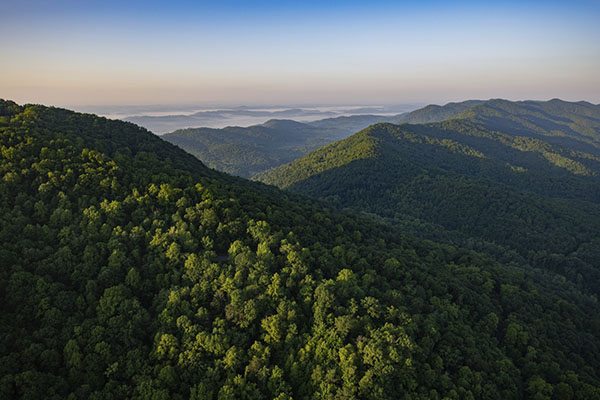 The Cumberland Forest Project protects 253,000 acres of Appalachian forest and is one of The Nature Conservancy’s largest-ever conservation efforts in the eastern United States. © Cameron Davidson; May 2019.

Soiler alert: According to a recent study in Nature, warmed soil — the kind used in farming — releases 55% more carbon than unwarmed areas. This puts companies such as Patagonia Provisions (a purveyor of packaged foods) in a position to either continue this trend or reverse it through practices such as regenerative organic farming. That’s just what Patagonia Provisions has done in the past several years, as the company’s co-founder, Birgit Cameron shares in this week’s episode of Force Multiplier.

“Understanding the effects of climate agriculture, in particular, on our soils, water, and air led us to the fact that food agriculture really is one of the biggest contributors to the climate issues that we’re facing today,” says Cameron.

“We needed to do something about this. So the task given to me in 2012 by our founder, Yvon Chouinard, was: ‘What would a food company look like for Patagonia?’ Patagonia Provisions had to be built on rethinking our food supply chain, rethinking our food system, and understanding the impact of this system on people and the planet. So everything we make has a very deep reason for being. We start with the environmental problem that we’re trying to solve, identify solutions that might help, and then develop products that help scale those solutions, using science as our compass and then working with top scientists, researchers and other industry experts. We draw upon their latest knowledge and innovation and then steer toward the solutions-based food economy.”

This is possible through strong partnerships. “We believe it pays to grow and farm regeneratively so that it’s economically and environmentally better for the farmers,” says Cameron. “So we support them and the ranchers and fishers committed to embracing restorative practices, to help them grow their business.”

If we continue to degrade the soil with industrial farming practices, she says, the world could run out of topsoil in about 60 years. “That’s only 60 harvests,” says Cameron. “Think about that. That’s not very long. But let’s turn it to the positive.”

That comes down to the conscious consumers — the force multipliers — who have the most power to create the change we need to see, says Cameron, by demanding healthier, more nutritious foods without pesticide residue, and education about these better ways.

“That’s one of the most important forces in creating change: helping people understand why they should make these adjustments and that it can be very beneficial to them,” she says, adding that Patagonia has created a digital marketplace inviting and including other companies that are moving toward restorative and regenerative practices to accelerate that collective. “We know that we can’t do this alone,” says Cameron. “So creating a platform like this can amplify that action.” 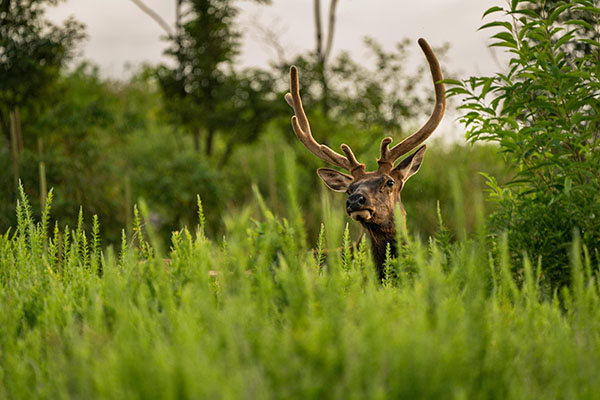 The Cumberland Forest Project protects 253,000 acres of Appalachian forest in Tennessee, Kentucky, and Virginia and is one of The Nature Conservancy’s largest-ever conservation efforts in the eastern United States. © Steven David Johnson; July 2019.

The Nature Conservancy Focuses on Local Solutions to Drive Change

Radical collaboration will drive tangible, lasting results in the realm of climate change, says Jennifer Morris, CEO of The Nature Conservancy (TNC). This means connecting across sectors, beliefs, and knowledge bases — and empowering local communities to protect the resources that sustain them.

“The greatest threat facing climate action is actually inaction — the inability of companies, governments, and individual citizens to really recognize the existential threat that is climate change,” says Morris. “It’s not something that’s going to happen to our kids. It’s something that’s happening now. And so for us to realize that inaction now will mean a lot more pain and a lot more expense just dealing with the weather later. We all have to do our part to stop the greatest threat of our time.”

With more than 40,500 people working in 70-plus countries, TNC is working to change its reputation as a “wealthy white person’s movement,” says Morris, and is pushing to bring in new people and promote the next generation of conservationists who look more like the global community. “We’ll make our organization stronger because we’ll be more diverse in ideas and thoughts, and simply be more representative of the global environment in which we all live.”

There’s a lack of understanding when it comes to agriculture and its direct link to climate change, says Morris. “The consumer needs to really understand those connections between health and environment,” she says. “We, as humans, are not separate from nature.”

Conservation is hyper local, adds Morris: “We need local people with local solutions driving local change.” When they need help, that’s where The Nature Conservancy and other large organizations can provide support with financial resources, technical resources, and providing access to avenues that different groups may not have. “So that is our ethos at its core. It’s not about parks and gardens and keeping people out. It has to be about locally-driven, locally-supported solutions. I’m seeing radical collaboration on many fronts.”

“We are sharing donors,” says Morris. “We are sharing ideas. People recognize that we’ll just be stronger if we can stop competing and start working together. The reality is, if we as companies, we as governments, we as citizens don’t move faster, we’re going to spend all of our talent and treasure just dealing with the weather.”

Morris sees the UN Climate Change Conference (COP26) in Glasgow from October 31 to November 1 as an opportunity to establish consistent carbon rules. “If anything was to come out of the proceedings in Glasgow for me and for The Nature Conservancy, it would be that we have clear the rules of the road around markets and that countries with large intact ecosystems receive the financial investment that their natural capital deserves,” says Morris, who also wants to see embedded rights for Indigenous people and more synergy between human “cement-based” technology and nature’s “green” technology, such as mangroves, grasslands, and coral reefs.

While Morris lauds efforts such as the Force Multiplier podcast for getting the word out, she says, “we have to shout louder and we have to do more.”

Learn more about the work that The Nature Conservancy and Patagonia Provisions are doing by listening to episode six of the Force Multiplier podcast.