#DFGives: Help Promote Early STEM in San Francisco with Too Small to Fail!

By: Kara Dukakis, Director, Too Small to Fail 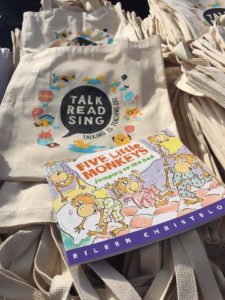 For the third year in a row, Too Small to Fail and Dreamforce are partnering to promote early brain and language development among thousands of families in the Bay Area. Join us on Tuesday, October 4 from 10:00 a.m. to noon at the Dreampark to lend a hand by assembling tote bags filled with materials to help English- and Spanish-speaking families in San Francisco support their children’s early brain development with a new focus on early STEM concepts.

Too Small to Fail, a joint initiative of the Clinton Foundation and The Opportunity Institute, aims to help parents, communities and businesses take meaningful actions to improve the health and wellbeing of young children, so that more of America’s children are prepared to succeed in school and beyond.

In 2014 we launched ‘Talking is Teaching: Talk Read Sing,’ a nationwide campaign that partners with trusted messengers in local communities to inform parents and caregivers of the critical influence they have on early brain and language development. Our tools make it easier for parents to make small moments big for their young children.

The campaign reinforces that simple, everyday actions–from reading together at the laundromat to playing counting games at the grocery store–can significantly improve a baby’s ability to learn new concepts. Our campaign has focused on early literacy and early math and, this year, has expanded to include early STEM (science, technology, engineering, math).

Even very young children can learn some of the basic concepts underlying STEM by solving problems, hearing their parents and caregivers ask questions, and exploring the world around them. The real-life skills that children develop when learning STEM help make them better problem-solvers and learners later in life. Parents and caregivers can support children’s natural curiosity about the world simply by talking, reading, and singing with them. 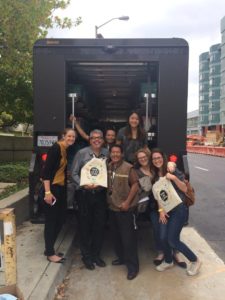 This is the third year that we have assembled bags at Dreamforce, but our partnership with Salesforce extends far beyond one day a year. Members of the Salesforce community across the country have assembled tote bags at other Salesforce.org volunteer events that have reached more than 7,000 families. The thousands of tote bags Dreamforce participants will help assemble this year will contain new tools designed to encourage local parents to engage children in everyday conversations about STEM, such as measuring ingredients while cooking and discovering the smell, feel and tastes of different items at the grocery store.

They will be distributed to families across San Francisco through our partnership with the San Francisco Public Library at the Tricycle Music Fest in October and other community events from November 2016 through April 2017.

We are excited to be a part of the 2016 conference and are thrilled to meet the thousands of Dreamforce attendees who will help us assemble these bags to help prepare San Francisco kids for success in school and in life.

Learn more about Too Small to Fail and the Talking is Teaching: Talk, Read, Sing campaign at toosmall.org and talkingisteaching.org and Twitter @2SmalltoFail.

Learn more about the exciting product announcements from the education and nonprofit keynotes at Dreamforce 2022.