Why Community Climate Action is Critical to Global Action

Take a little journey with me: Close your eyes and take a deep breath. Imagine the smell of pine needles, the warm spring sun dancing through the trees and shining on your face, the enticing melody of birds chirping around you. Not exactly what you’d have in mind if I told you to imagine yourself at the World Economic Forum in Davos, right? But that’s the amazing scenery Davos has to offer, just five minutes from downtown if you take the Funicular up to the Schatzalp. We invited WEF attendees to take a break from the hustle and bustle by going on a guided walking tour where they would hear from students and activists about their sustainability journeys at several stops connected to climate action, on both a global and a community level.

First up were our co-hosts from Arctic Basecamp, who had set up camp in front of Hotel Schatzalp, with a big tent for presentations and several smaller tents for sleeping—a tradition now in its fifth year. In January 2017, a group of leading scientists set up an Arctic Basecamp at Davos for the first time and hosted a VIP Arctic science briefing. Since then, Arctic Basecamp has returned to Davos every year except for 2021, when the annual meeting took place virtually because of the pandemic, with an expedition tent acting as a workplace during the day and a dormitory at night. They camp in sub-zero temperatures and call on global leaders to apply responsive and responsible leadership to address the global risks posed by Arctic change.

Since the annual meeting was held in May this year, instead of January, temperatures surrounding the camp were less arctic, but the mission of the Arctic Basecamp team and its youth ambassadors from around the world stayed the same: To highlight the urgent need for scalable solutions to climate change and bring the message of Arctic risk to business and policy leaders at the World Economic Forum.

To start off our guided tour, the Arctic Basecamp team talked attendees through their mission and demonstrated a thermal measurement sensor they had brought to Davos. Then we set off down the mountain to learn more about the climate action that students at Davos Middle School had undertaken over the past few years as part of Davos Codes, a year-round program designed to engage youth in Davos through a series of STEM classes and workshops that promote the UN’s Sustainable Development Goals (SDGs).

Our next stop was by a stream, where attendees heard how in 2018, we empowered the Davos students to test local waterways for plastic. The students were shocked to see the levels of plastic particulates in their freshwater lake and waterways. This discovery led to a successful campaign to implement plastic recycling in town.

Continuing on the winding path down the mountain, we saw local wildlife like squirrels and birds. Normally during the WEF annual meeting, there would be too much snow to do this, so it was a unique experience for Davos attendees. 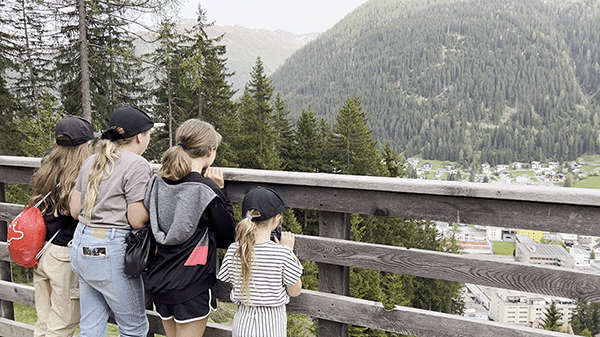 Young people need continued support in their fight for climate action, through opportunities to raise awareness at global events like WEF and by empowering them with tools and skills to take action on the SDGs.

On the bridge over the funicular track, we talked about the first Climate Action Lab, launched in 2020 as part of Davos Codes. Students became citizen scientists, measuring their local environment, studying and sharing the results with the global citizen science network, and affecting local law by presenting data that showed the severe impact of annual New Year’s fireworks in Davos on local air quality. In October 2020, the people of Davos decided in a referendum to prohibit private fireworks on New Year’s, leading to a significant air quality improvement when students measured the data again the following year using simple maker kits. The students learned quickly how basic technology can be leveraged at a community level to drive impactful change in the fight against the climate crisis.

As the trail opened up to the town below, we discussed the need to continue supporting young people in their fight for climate action. Both Arctic Basecamp and Davos Codes share a passion for empowering young people to participate in creating a sustainable future—by facilitating their participation in global events like WEF to raise awareness of the climate crisis, but also by giving them the tools and skills to create a brighter future for themselves. In 2021, the Davos Codes Climate Action Lab went global and virtual, with labs popping up in San Francisco, Tokyo, and Bangalore. These youth citizen scientists began tracking fauna and flora and developing responses to natural disasters.

When given the opportunity to improve the state of the world, community by community, the young people we have the privilege of working with develop a passion for the environment, driving their projects forward tenaciously and enthusiastically, and show us what an incredible impact climate action at the community level can have on a global scale. 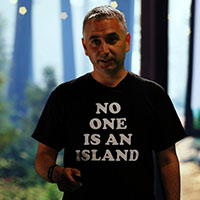 Will Coleman is the creative director for Salesforce.org and cofounder of Davos Codes.