From Salesforce Dojo to Coolest Projects…

You are a laser-toting cat racing through space. Your mission: to survive as long as possible and rid the galaxy of every flying cyber-dog that you come across.

This is “Space Adventure”, a video game designed by 11-year-old Gabriel Negru, a precocious young coding ninja from CoderDojo who recently won an award on his first entry into this year’s Coolest Projects Awards, a national tech event for the world’s youngest innovators, creators and entrepreneurs. The event gives young people the chance to showcase their projects by using their creativity and coding skills to build cool apps, games, websites and robots.

“I like coding, it’s lots of fun and it’s a great skill to know,” says Gabriel. “But I want to learn lots of other coding programmes so I can make more complex games.” 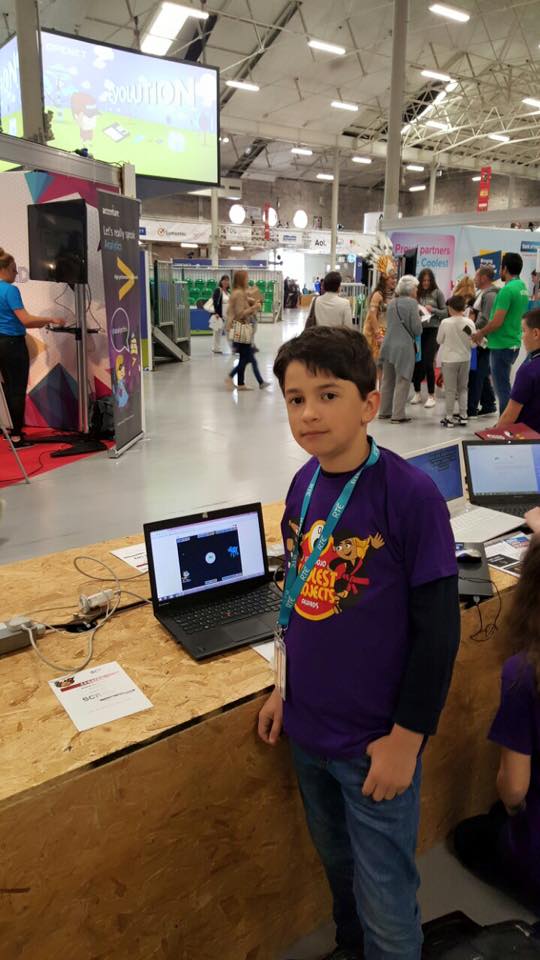 Gabriel began attending Dojos in February 2015, where he has been learning how to programme his own interactive stories, games and animations using Scratch, a free programming language for young people. In June, Gabriel presented his game to a panel of three judges, and was assessed based on his presentation and the complexity of the project. After a long day of judging 700 project entries, Gabriel was delighted to take home a Rookie Scratch Coder award. Since then, Gabriel has joined the Citywise robotics club, and has already begun learning HTML and Java.

“Gabriel has always had an interest in computers. He keeps saying he wants to be a software engineer when he’s older,” says Galina Negru, Gabriel’s mother. “I was very happy and proud to see his hard work pay off. But he couldn’t have done it without the support of Citywise and Salesforce – the leaders and volunteers at the Dojos are fantastic role models for the children.”

CoderDojo is a global network of free, volunteer-led, community-based programming clubs that teach young people how to code, develop websites, apps, programs, games and explore technology in a fun and creative environment. Salesforce.org hosts Dojos for students at the Salesforce.com Dublin offices, where employees volunteer their time to help young people from Citywise learn HTML and Scratch in engaging, interactive ways, while socialising with other kids who share similar interests. Citywise is a Dublin based organisation that provides young people from underrepresented areas with after-school and out-of-school educational support throughout the year.

“I was very happy and proud to see his hard work pay off. But he couldn’t have done it without the support of Citywise and Salesforce – the leaders and volunteers at the Dojos are fantastic role models for the children.”

Christopher Smyth, IT and Academics Manager at Citywise, says: “Many of the kids come along to CoderDojo not really knowing what to expect, but having a keen interest in using computers and making their own games has encouraged them to take part. I don’t think it has dawned on them yet that this could be a career changer but I think when it does, it will be spectacular!”

In 2014, it was reported that Ireland is in the midst of a skills shortage, with around 7,000 jobs in the technology sector going unfilled. Gabriel’s incredible achievement at this year’s Coolest Projects Awards is not only a testament to his bright future in coding, but is also a reminder of what can be accomplished at a community level with a bit of engagement between industry volunteers, parents and students.