If you’ve gone jogging in London or Dublin recently and sighted a wild herd of cheerful Santas running, this blog post may provide some explanation. If you live in any other large European capital city, get ready for a similar sighting at a park near you.

Since the start of Salesforce’s pilot graduate programme, in September 2017, over a hundred millennials have gushed through the doors of Salesforce, welcomed with open arms to take part in almost anything that appeals to them, while training for their roles in CSG or SE.

The ‘customer’ here is ASTRiiD, a platform that helps businesses tap into a valuable and invisible talent pool: chronically ill yet skilled individuals. Check out the video below to learn more.

ASTRiiD aims to provide a platform on which businesses can connect with individuals who have long-term illnesses to provide work opportunities benefiting both parties.“Every year, many thousands of people are given a life-changing diagnosis of serious illness”, said David Shutts, Founder of ASTRiiD. “When work is suddenly removed, it can result in solitude, financial pressures, and a feeling of worthlessness -ASTRiiD’s mission is to provide meaningful work for people with long-term health problems”.

To make the platform accessible and scalable, ASTRiiD partnered with Salesforce.org via the Power of Us Program, accessing world leading technology to power its platform, as well as a valiant Salesforce pro bono team that has helped to design, build, and test its platform ahead of its launch this month.

The Story So Far…

After meeting David Shutts himself in September and learning about opportunities to volunteer, a handful of Salesforce graduates jumped in to support. Then, through word-of mouth and the power of Chatter, Salesforce’s internal social network, more and more graduates joined to propel the project forward.

In October, a dream team of ten London graduates started working part-time on the project, supporting ASTRiiD on both the technical side, and the fundraising side – brainstorming ways to raise money for the platform. With the goal of raising £2,500 in under a month – the challenge was real.

The idea to organise a Christmas Fun Run somehow made its way into the thought process – and it stuck!

The team then took to Chatter to share their involvement, hoping another Hub might rally in to support. Instead, every Hub wanted to pitch in – starting their own fundraising campaigns locally, and organising their own runs. 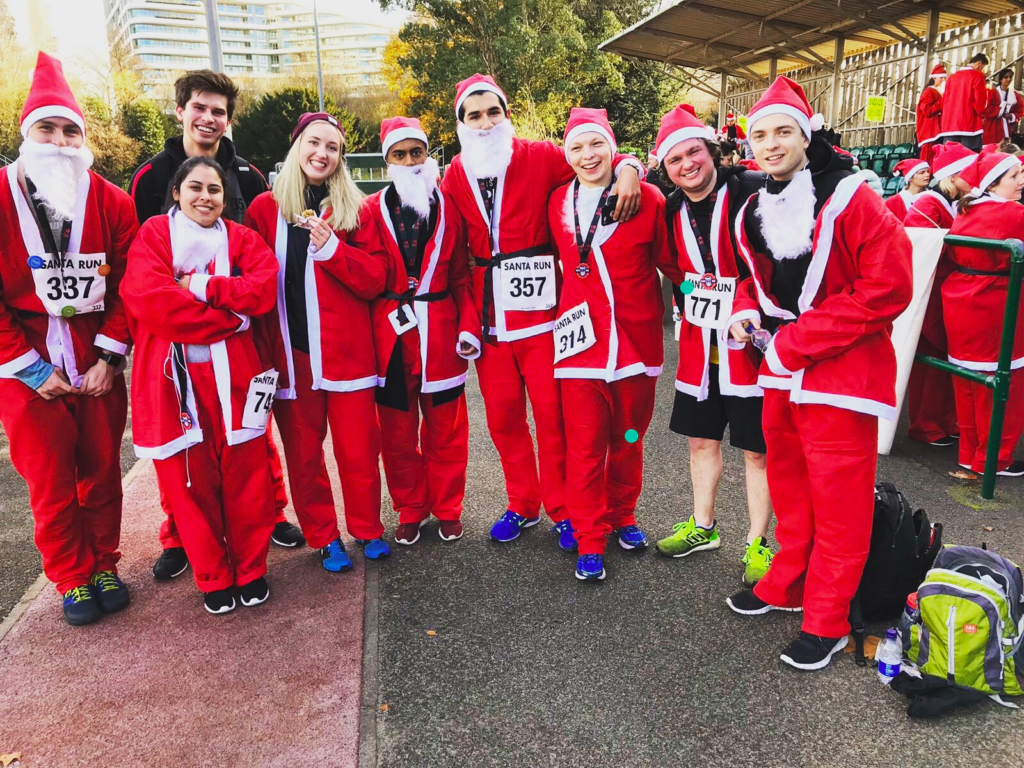 The London Santa Run took place at Battersea Park on Saturday 9th December. Together with other Salesforce employees who also ran in the name of ASTRiiD, they joined over 2000 other runners who were running for multiple causes, including Noah’s Ark Children’s Hospice in London. The initial target of raising £600 for ASTRiiD, as well as the subsequent target of £800 were both smashed, with a total of about £900 raised for the cause!

Sixteen graduates from the Dublin Hub rocked their Santa Suits and officially kicked off the Run4ASTRiiD season on a sunny Sunday afternoon in North Bull Island, about one hour north of central Dublin.

Two thousand Santas attended the run, supporting various causes such as that of a teenage girl affected by a neural tube defect. Thanks to the incredible support received through Chatter from numerous members of the Dublin and EMEA Ohana, and to impromptu presentations to colleagues based in Dublin, the Dublin graduates have almost reached their goal of raising €500 for ASTRiiD! With graduates all across EMEA raising awareness of ASTRiiD, contributing their ideas, and sharing their involvement on social media, the platform has received a great deal of support and momentum. And this is without even taking into account the events in Paris, Berlin, and Amsterdam which are scheduled for January.

As we all go home for the holidays this week, let us keep in mind those who need our continued support and let’s make it our mission to rally together in 2018!