A good and delicious cause

On Friday, August 3rd sixty Salesforce super volunteers arrived bright and early to the Alemany Farmer’s Market where we would help La Cocina prepare for their 4th Annual San Francisco Street Food Festival happening this weekend in San Francisco.  La Cocina is a non-profit restaurant business incubator based in the Mission District of San Francisco. Their aim is to help low-income immigrants live their dreams of owning and operating a restaurant business by providing assistance with everything from sales/marketing to actual recipe development. La Cocina, which translates to “the kitchen” in Spanish, also provides a commercial kitchen where program participants can prepare their fare. The San Francisco Street Food Festival, a day-long event where over seventy food vendors, restaurants, trucks, and carts dish out their best along six blocks in the Mission, is crucial to the organization’s subsistence year over year as it is their primary source of funding. 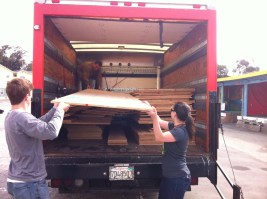 The day we volunteered was a brisk and blustery morning, but that was quickly forgotten as volunteers were greeted to a breakfast of hot coffee and piping hot piroshkies, little savory meat-filled pies made with love by one of La Cocina’s program participants (think of it as a Russian empanada). After breakfast, volunteers broke into groups and got to work.

Over 250 tables and benches had to be prepared by hand. This meant that literally tons of plywood had to be loaded into a truck, unloaded, cut, drilled, painted, shellacked, organized by size, and then finally reloaded back into the truck. This was truly a time-consuming and laborious effort that took the entire day. La Cocina graciously refueled volunteers with a lunch of tasty tamales provided by Alicia’s Tamales, another one of La Cocina’s program participants who has a food cart stationed near the San Francisco Salesforce HQ. 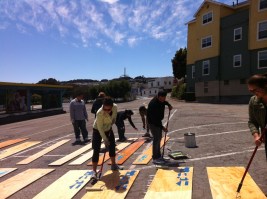 This is the fourth year La Cocina is hosting the Street Food Festival and the third year salesforce.com employees have helped with the setup.

In addition to organizing volunteers, I’ve also helped La Cocina move onto the salesforce.com platform, where they are using custom-built Force.com applications to manage donations, volunteers, and program participants. But the coolest part of my involvement with La Cocina was spent helping create a contest on the platform for the Street Food Festival. With the help of Ryan Brainard, a now Heroku engineer whom I met five years ago back in my days 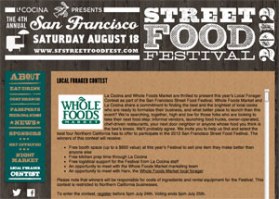 in salesforce.com Tech Support, we built a contest on the force.com platform using a little Apex and Visualforce to allow people to vote for their favorite food vendors to win a spot at the San Francisco Street Food Festival. There were over sixty entrants in the contest and over 6,000 unique votes. The contest even got written up in the Huffington Post. Turns out that 1% of time and product can have some pretty large results.

Both the event and the volunteer force have grown exponentially year-over-year, and I feel honored to be at a company that has let me help contribute to a cause and foundation that I so strongly believe in.