5 Easy Ways to Get Your Daughter Interested in Coding

For all the work being done to close the gender gap by high profile advocates like Melinda Gates, it’s actually creeping back open in computing. That’s according to Girls Who Code, which states that while 37% of computer scientists in 1995 were women, only 24% were in 2017. That number is projected to dip even lower to 20% by 2027.

Bry LeBlanc of Kids Code Jeunesse says there are two main barriers her organization is working hard to remove when it comes to the gender gap in STEM (science, technology, engineering and math). One is the social stigmas that arise in high school, which tend to discourage girls from continuing in STEM subjects. The other is the current industry landscape, which lacks the diversity needed to attract a broader spectrum of people. 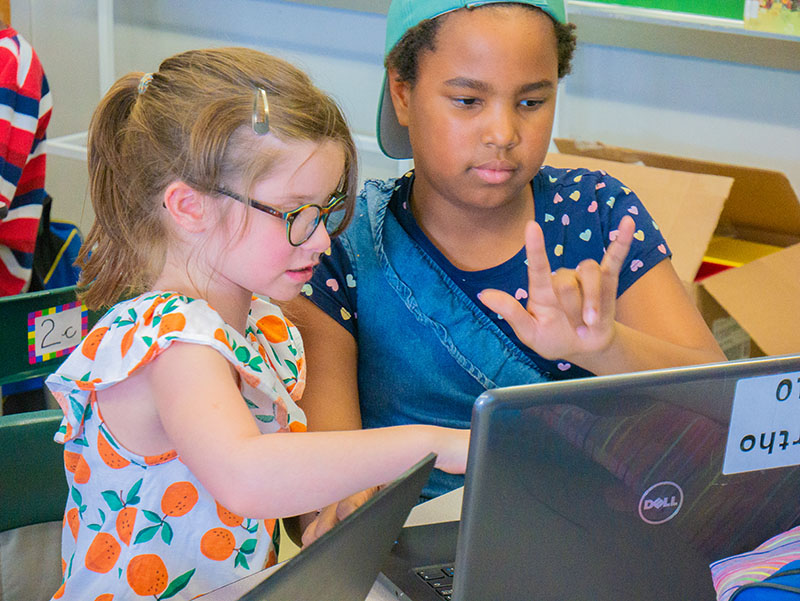 It’s one thing to know the reality our daughters face — it’s quite another to know what to do next. Here are five easy ways to get your daughter interested in coding.

Bry’s advice is for schools to start teaching code to children as young as eight years old before the social stigmas set in. Caitlin Tuba, Data Protection Officer at Traction Guest, echoes this sentiment. “At the coding camps I’ve taught, by the time the girls are 12 and 13 years old, they have to check everything with their mentors. There is social pressure for girls to be right.”

As a parent, the encouragement doesn’t end after seeing the initial spark in your daughter — you need to stay involved. There are many ways to keep coding top-of-mind: sign your child up for an extra-curricular program, talk to her school about integrating code and do activities at home together. “Parents supporting their child’s interests at a young age definitely has an impact on their ambition,“ says Bry.

“Curiosity Killed the Stereotype: Let’s build an army of maker girls — you know this ain’t your mama’s toy aisle.”

With a splash of pink on its website, the target market for GoldieBlox is obvious. But with the tagline “Curiosity Killed the Stereotype: Let’s build an army of maker girls,” you know this ain’t your mama’s toy aisle. While much has been said about gendered toys, parents still have an awareness of the types of activities their children gravitate to. Paula Brunton, a general manager at Traction on Demand, says her daughter loves crafts. “GoldieBlox are kind of like crafts but there’s a mechanical way of thinking that goes into it.”

Caitlin was two grades ahead in math all through school, and was the only student in her high school to take twelfth grade physics. Yet no one ever suggested she explore computer science as a career. “I thought it was because I lived in a small town, but I later found out three boys in my year were encouraged to pursue this path even though they didn’t have the same academic background as me.” 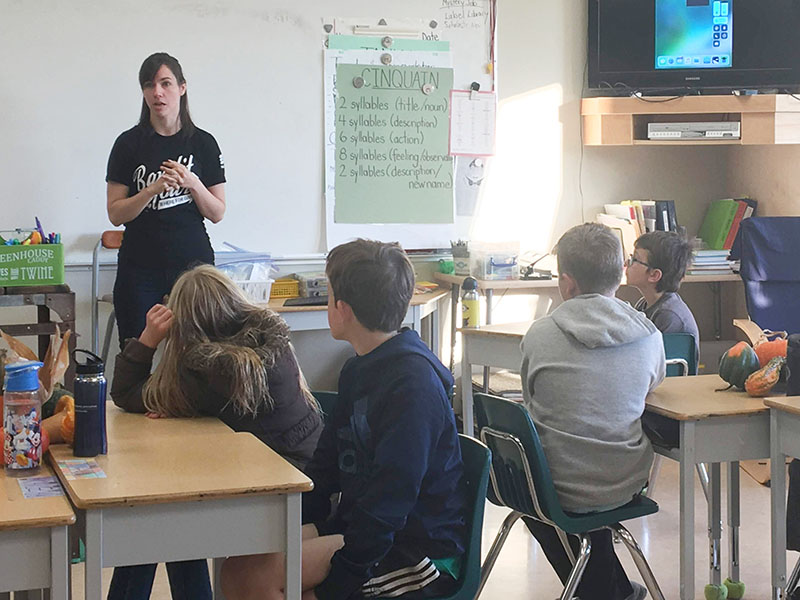 Are we still subconsciously pushing our sons toward careers in tech and business when really, women are showing just as much, if not more, success in these fields? The numbers show girls are woefully underrepresented in technology at school. A McKinsey study shows 47% of girls show an interest in learning computer science in middle and high school, but by the time they get to the end of high school, only 23% of girls take the AP (advanced placement) computer science test. The initial interest is there. We must take the appropriate steps to enable girls to get to the finish line.

“Hiring women in tech is not a ‘nice’ thing to do,” said Paula Brunton. “It is necessary to drive our business forward. We need to have women talking to girls in high school. They need to see people like themselves.” According to Courtney Devin of Canada Learning Code, “One of the biggest ways of getting people into coding is through having diverse representation, especially at the leadership level.”

Are you a hiring manager? Start paying particular attention to the female candidates that come across your desk. Currently, only 11% of the senior leadership roles in tech companies are held by women.

A woman’s career doesn’t just have to be about coding — that’s what Caitlin wants girls to know. She applauds institutions such as the University of British Columbia (her alma mater) for offering a combined major in computer science and another science subject. Unsurprisingly to her, their statistics show relatively high enrollment for women. “Women are more likely to have diverse interests,” surmises Caitlin. “Coding is an ‘all in’ industry, so maybe women are discouraged because they have other interests they want to explore. I’d like to see companies provide hybrid roles so you don’t have to be 100% developer.”

Bikes & Bytes, a week-long summer camp for kids, is split into half days of coding instruction and bike adventure. It’s just another example of how two different activities can come together to enrich a child’s overall experience. 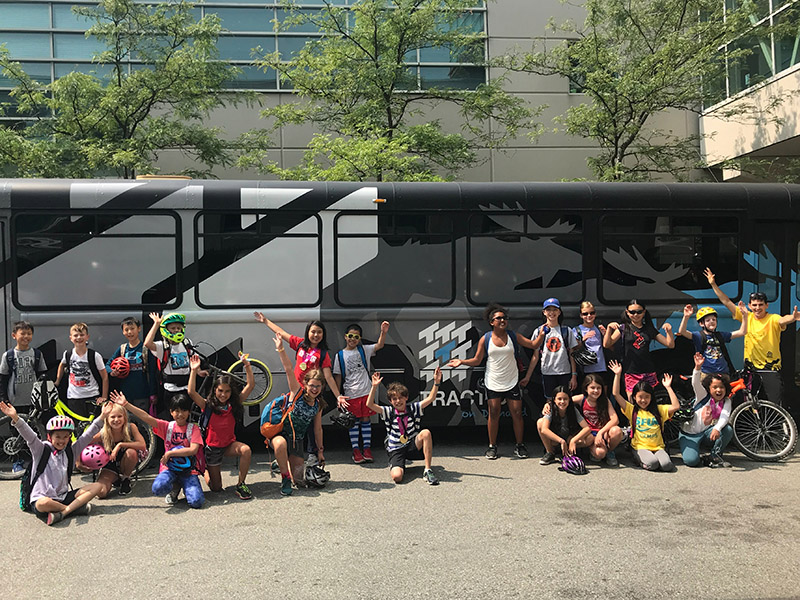 Bikes & Bytes, hosted by Traction on Demand, combines biking with coding so kids can explore their different interests.

We all need to be part of the solution

“My responsibility is to make sure I’m doing everything I can to eliminate whatever barriers she encounters on the way.”

Ultimately, the better informed you are, the better you’ll be able to set your daughter up for success. Get intentional about guiding them toward their chosen path by educating yourself on all the different career possibilities in STEM. Salesforce is projecting 3.3 million new jobs by 2022. Is it something you’re talking about with your daughter?

Women, like those mentioned above, are already paving the way forward with their actions and ideas. But the responsibility of getting girls interested in coding is not theirs alone. People of all backgrounds and organizations must be a part of the conversation. Matthew Arsenault, a Data Specialist at Traction on Demand with a 3-year-old daughter, says “I feel my responsibility is not necessarily to get my daughter interested in STEM but to make sure she gets exposure to technology and the possibilities that are out there. My responsibility is to make sure I’m doing everything I can to eliminate whatever barriers she encounters on the way.”

Caitlin and Paula work for a tech company that is currently 38% women overall. At first glance, it’s on the lower end of what it should be, but it’s actually higher than the national average.

Learn about what it takes to be a Best Workplace for Women, and let’s get intentional about shaping a future for our daughters in which such a distinction need not exist.

To help advance equity in education, especially for girls, here are some actions you can take:

Traction on Demand is a Salesforce.org Premium Partner that helps nonprofits succeed with Nonprofit Cloud and helps educational institutions succeed with Education Cloud. 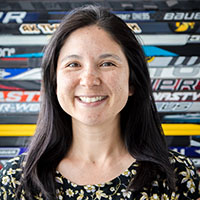 Karen Glanzberg is a content developer at Traction on Demand, where she is proud to be part of a company named a “Best Workplace for Women.” Prior to that, she wrote blog articles and produced videos about marine conservation and education at a nonprofit. She enjoys writing about her Japanese-Czech cultural heritage and sharing her experiences with postpartum depression.

Higher Education What the Great Resignation Means for Higher Ed

All industries are grappling with the “great resignation”, but for higher ed it offers a call to transform and better…

Higher Education Unlock Access to Careers with Jobspeaker and Salesforce

Read a Q&A with the CEO of Jobspeaker, an organization that’s working to address the delta between employment opportunities and…